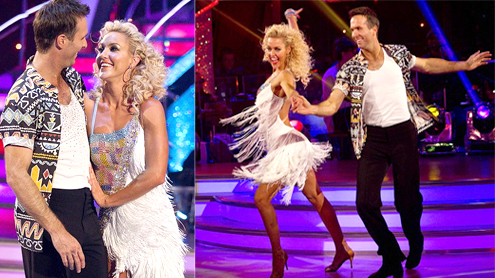 Former England cricket captain Michael Vaughan has become the eighth celebrity to be voted out of this year’s Strictly Come Dancing.

The 38-year-old and his partner Natalie Lowe said farewell to the series after a dance-off with Nicky Byrne and Karen Hauer.Ahead of the decision, Michael and Natalie repeated their samba from Saturday’s show, which left them bottom of the leaderboard with 24.However, all four judges opted to save former Westlife singer Nicky and Karen following their Argentine Tango.After learning of his fate, Michael said: ‘I’ve had a ball. Nine weeks ago I had never been on a shiny floor, and I’ve got to December.

‘September, October, November and still dancing in December. I’ve drained every ounce of dance ability out of my body because of this lady…everything about this show, the judges and everyone backstage, all the contestants have been great, I’ve got new friends that I’ve made for life.’Nicky thoroughly deserved that win, he wiped the floor with me! I’ve had a ball, and the real winner for me is this one (Lowe). She got me to the ninth week, which is quite remarkable.’

Australian professional Natalie praised her partner: ‘Words can’t describe how incredible you are. Thank you so much for making this dream come true.’I’m sorry I couldn’t have taken you further.’Craig Revel-Horwood praised Nicky and Karen: ‘Well this couple were absolutely sensational, the second time round. That couple was Nicky and Karen.’Darcey Bussell agreed: ‘Well they both upped their game tonight. It’s really difficult, but I’m going to save Nicky and Karen.’

Bruno Tonioli said: ‘Well I really have to go for the couple who for me had the licence to thrill…and that was Nicky and Karen.’Matthew’s exit means there are six celebrities in the competition, with just three weeks in sight until the final.Meanwhile, boy band JLS performed their single Hold Me Down, while West End star Alfie Boe also sang.