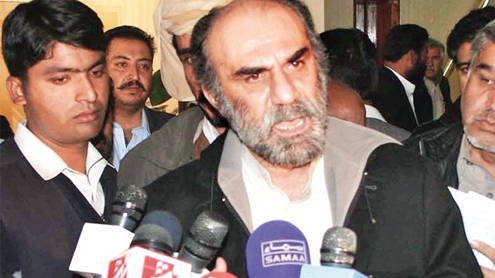 QUETTA: Chief Minister Nawab Aslam Raisani on Monday censured the ‘non-serious’, ‘irresponsible’ and ‘undemocratic’ attitude of Interior Minister Rehman Malik when the latter failed to visit Quetta as per a pre-announced schedule.

The Interior Minister, while visiting the provincial capital was due to appear for an in-camera briefing at the specially convened session of the Balochistan Assembly. However, when Malik failed the appear, the assembly was adjourned just three minutes into the session, leaving Raisani red in the face.

Talking to a group of reporters afterwards, he disclosed that it was Malik who had shown his personal interest in giving in-camera briefing to the Balochistan Assembly on the law and order in the province. In addition, Malik had requested the Balochistan government to issue a formal invitation. This request was complied with, but the interior minister failed to honour the invitation.

The chief minister said that due to the highly irresponsible attitude of the interior minister, privileges of the members of the Balochistan had been violated on which he would protest.The Government of Balochistan had convened a special session of the Balochistan Assembly on Monday enabling the Interior Minister Rehman Malik to give in-camera briefing to the entire house.However, he failed to reach Quetta for the briefing causing a breach of privileges of the members and the session had to be adjourned for the day. – Tribune