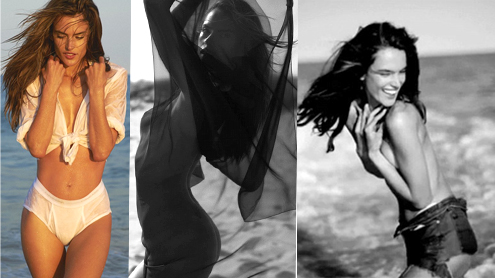 Victoria’s Secret dressed her in a $2.5million Fantasy Bra for their annual runway show.But it doesn’t take rubies and gold for Alessandra Ambrosio to look good – she’s just as at ease completely naked.The Brazilian model posed seductively on the beach, lying on her front and nibbling at her hand for the new edition of Made In Brazil.She was utterly nude, revealing her star and moon tattoo on her rear.Alessandra then grabbed a sheer sarong and spun around unselfconsciously, gazing at the camera.Of course, with a body this good she has no reason to be shy.Alessandra even looked good as she posed in a pair of sopping wet Y-fronts and a wet shirt tied at the front.

The 31-year-old is the first woman to appear in the cult magazine, which celebrates the male models of the country.And Alessandra certainly had plenty of company in the shots by photographer Stewart Shining.The shoot shows her cavorting with a gang of handsome men, rolling around in the sand in a black swimsuit and clambering all over them.The concept was loosely inspired by one of Alessandra’s first editorial shoots shot with Shining when she was just starting her career at 17 years old.

Entitled Alessandra, the editorial is a full 46 pages long, the biggest ever published in the magazine, and was photographed in Amagansett in New York by mid-September.It features cameos from fellow Brazilian models Caio César, Diego Fragoso, Pedro Aboud, and Bruce Machado.A video of the saucy shoot has also been posted to Vimeo.In the 18 second clip Alessandra is seen crawling along the sand, cosying up to a hunky male model and running along the beach topless.

The mother-of-two, who gave birth to her son Noah in May has snapped back to her pre-baby body with ease.Alessandra certainly seemed to enjoy her time on the photo shoot and on Friday she posted a link to the website on her Twitter page.The model tweeted: ‘I had so much fun shooting for Made in Brazil with Stewart. See a preview of what’s coming up!’Busy Alessandra will tonight feature prominently on the CBS screening of the 2012 Victoria’s Secret show. – Dailymail