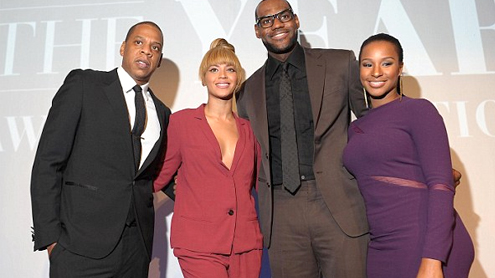 He’s a well-known sports fan, and part owner of the Brooklyn Nets.So perhaps it was little surprise Jay-Z – joined by wife Beyonce – was among those in the crowd as LeBron James was crowned Sports Illustrated’s Sportsman of the Year on Wednesday night.

The superstar couple sat next to the Miami Heat player as he prepared to accept the honour at the Sports Illustrated Sportsman of the Year award presentation at Espace in New York City.Beyonce wore a burgundy pantsuit for the occasion, paired with towering black platform stilettos with silver embellishment.She wore her hair twirled atop her head in a bun, with fringe falling around her eyes.Jay-Z, real name Shawn Carter, was dressed in a suit and tie, and among the sports elite, the couple smiled at the stage as they watched the evening’s presentation.

The couple left their daughter, 11-month-old Blue Ivy, at home.Beyonce, 31, gave birth to the baby girl – their first child – on January 7.While the pair are known to keep Blue shielded from the public, a newly-released teaser for the singer’s forthcoming HBO documentary features Beyonce chronicling her early days of pregnancy – long before she announced the news to the public. The as-yet untitled film, directed by Beyonce, is set for release in February.But for the evening, all eyes were poised on James.

The Miami Heat star admitted he was surprised to receive the accolade from SI – not because he thought his achievements in 2012 weren’t worthy, but because he figured what happened in 2010 was still holding him back.Apparently, that’s no longer the case. The magazine announced its annual choice Monday, with James becoming the first NBA player to win the award since Heat teammate Dwyane Wade in 2006.’I remember just like yesterday when I signed here and basically, like the roof caved in,’ James said, referring to the fallout from his infamous Decision to leave Cleveland for Miami in 2010.

‘To see that I and my team and everyone around me was able to patch that roof up, to come to this point, to come to this point and receive such a prestigious award, it’s huge.’ Past winners include Muhammad Ali, Jack Nicklaus, Wayne Gretzky, Arthur Ashe, Tom Brady, Derek Jeter and Michael Phelps. College basketball coaches Mike Krzyzewski – James’ Olympic coach – and Pat Summitt shared the honour last year.

James won essentially all he could win in 2012: He became an NBA champion for the first time, won the NBA Finals MVP trophy, helped the U.S. win Olympic gold for the second time and picked up his third NBA MVP award.This is the 18th time James will be on SI’s cover. His first time was as a high school junior in February 2002, when the magazine famously dubbed him #The Chosen One’ and touted how he would have been an NBA lottery pick even then. The first 17 covers were different: Only this one has James wearing an NBA championship ring.

James said the sportsman honor was humbling considering this was year in which Usain Bolt, Michael Phelps, Gabby Douglas and Missy Franklin starred at the London Olympics, Miguel Cabrera became baseball’s first Triple Crown winner in 45 years and Roger Federer captured Wimbledon for the seventh time.”Do I need it? I don’t need it,” James said. “I don’t ever look for individual accolades. I do what I do because I love it and I want to continue to get better at it.”The December 10 issue of SI is now on stands. – Dailymail