CII identifies over 100 articles from bilateral treaties as ‘un-Islamic’ 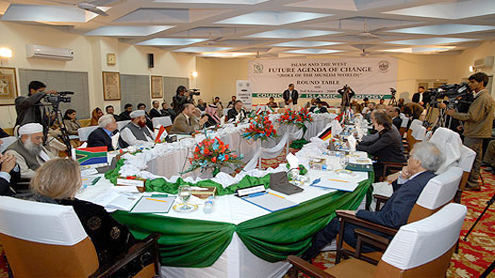 CII identifies over 100 articles from bilateral treaties as ‘un-Islamic’

ISLAMABAD: The Council of Islamic Ideology (CII) seems all set to open a Pandora’s box as it is going to discuss and give recommendations on around 105 articles from hundreds of bilateral and multi-lateral treaties and conventions the country signed during the period from 1947-2009, after it identified them as ‘un-Islamic’, Media learnt from reliable sources on Thursday.

“The Council research project believes that these over 100 articles from hundreds of bilateral and multi-lateral treaties and conventions the country signed till 2009 are repugnant to the Islamic injunctions,” sources in the CII said. Being an advisory body, the Council is not as assertive as those in the Arab world, but the move is likely to stir a new controversy in the country.

In a rigorous exercise stretched over 22 months, the Council reviewed around 1,233 bilateral/multi-lateral treaties and conventions of different nature signed by Pakistan during the period from 1947-2009, and marked as repugnant to the Islamic injunctions over 100 articles, mainly dealing with import, export and use of ‘forbidden stuff’ and promotion of ‘un-Islamic activities’, the sources said.

The sources said the Council has marked as ‘un-Islamic’ the articles which cover the import, production and business of liquor, hides of dead and haram animals and products from the hides of these animals, such as leather shoes, bags, gloves, etc. The Council also tagged those treaties as ‘un-Islamic’ which talk about the exchange of cultural troupe and dance parties between Pakistan and other countries. The element of interest and markup, a routine feature of the monetary dealing amongst states, also led to the identification of many articles as repugnant to the Islamic injunctions, the sources said.

“The Council considered such articles as repugnant to the Islamic injunctions which deal with the import, export, preparation and use of ‘forbidden’ items and promotion of un-Islamic culture,” the sources added. The CII research team, they said, is in the final phase of compiling a report on the objectionable articles and the same will be put before the members of the Council in a meeting likely to be held in end January or start February for their consideration and recommendations.

“The Council members will give their opinion on the marked articles in the light of teachings of Islam and prepare recommendations for the government on the subject,” the sources concluded.The CII, presently being headed by Senator Maulana Muhammad Khan Sherani of the JUI-F, is a constitutional body that advises the legislature on whether or not a certain law is repugnant to Islam, the holy Quran and Sunna. – Dailytimes