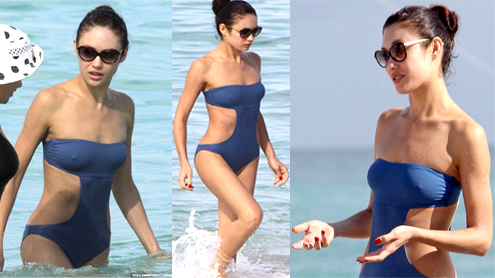 And Olga Kurylenko slipped into a sexy blue monokini to spend a much-needed day off soaking up the sun and surf on Miami Beach Sunday.The make-up free 33-year-old emerged from the ocean flaunting her slim frame in the strapless one-piece, which she accessorised with a pair of cat-eye sunglasses.The former Bond Girl made sure to put her brunette locks up in a top-knot as she splashed around in the waves.

After her relaxing dip, Olga rested on a sun lounger while speaking with her Magic City co-star and boyfriend Danny Huston, who was wearing a white fedora.Huston, who at 50 is nearly 20 years older than Olga, plays a sadistic 1960’s mobster in the Starz series while the Ukraine-born beauty plays a showgirl named Vera Evans.’I don’t go to the gym! I take dance classes,’ Kurylenko recently told Black Book.

‘It’s partially for the role, [but] it’s so much fun though. To feel your body moving. I’m like, what have I been doing all these years?’ As a child, the Quantum of Solace starlet had trained as a professional ballet dancer but had to stop after getting hit by a car and breaking her leg.’One piece was sticking this way and the other was going that way. I was 11 and I freaked out,’ recalled Olga.’I thought, “This is it,” and I looked at it and I didn’t think someone could put that back together. I was traumatized. I thought that was the end of me.’

The twice-divorced actress was spotted wearing an elegant white tubedress as she clung to her much-older beau at the Chanel dinner and auction at Soho Beach House last Wednesday.Olga beat out Olivia Wilde, Noomi Rapace, and Jessica Chastain for the role of Julia in action-adventure flick Oblivion, due out next April, with Tom Cruise and Morgan Freeman.

The Seven Psychopaths star, who speaks fluent Russian, English, and French, also scored the lead role in Terrence Malick’s To the Wonder.However, she had a less than idealistic experience shooting her scenes with Ben Affleck, who plays her lover in the drama.’It was awful. He had to be Neil, this cold person, and I assume he was instructed to stay in character on the set. I don’t know, but I assume because I just realized that’s what he did to all of us,’ said Olga. – Dailymail