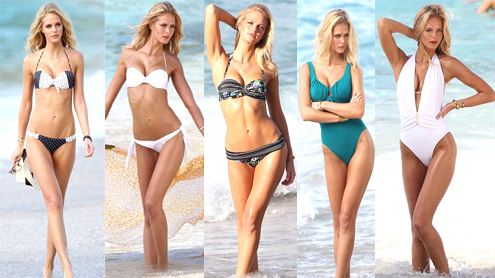 She’s one of the more cherub-faced Victoria’s Secret Angels but don’t underestimate Erin Heatherton’s ability to heat up a beach like her fellow supermodels.

The 23-year-old blonde posed in a variety of bikinis in St Barts on Monday.Shooting in the lingerie giant’s latest swimwear collection, Leonardo DiCaprio’s ex will certainly have no shortage of admirers with this latest editorial.The lithe American beauty was seen tossing her hair back and frolicking in the sand in several of the images.Her beach blonde locks were tousled around her shoulders, while her make-up complimented her sun-kissed skin.It’s hard to imagine how Victoria’s Secret – a company that’s had it’s share of Photoshop fails – might alter her image for catalogues.

Wearing a polka dot two-piece, Erin showed off her taught stomach and tiny frame, with not an extra inch of flesh to pinch.Minders were careful to ensure she didn’t fall out of the number, with one stylist pictured helping to tie up her top in between takes.Erin also modeled a floral and striped bikini and a teal one-piece, managing to make even the more modest number look sexy.It was an impressive performance by the model, who only four days ago tweeted she was still recovering from mouth surgery.

‘Recovering from my wisdom teeth removal,’ she wrote on December 6.But Erin was in good company, including an image she attached of her French Bulldog lying with her in bed.’Eddie is loving how much extra bed time he’s getting. What a cutieface,’ she gushed.While she’s a celebrity in her own right after rising to fame modelling for Victoria’s Secret, Erin’s star rose over the summer thanks to her romance with Leonardo DiCaprio.The former couple dated for 10 months before they split earlier this year amid reports he didn’t want to settle down and they struggled to see each other because of their busy schedules.The stunning model previously insisted she is doing fine after their break-up.’I’m having the best time right now. I couldn’t feel more beautiful with all my friends. – Dailymail