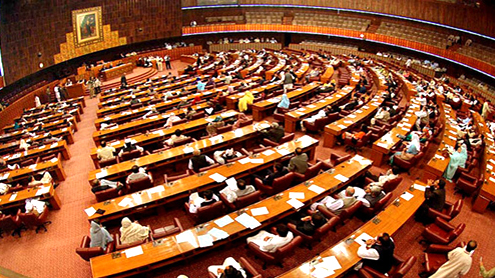 ISLAMABAD: NA PAC has sought lists from all the four provincial chief secretaries within a week in respect of federal government employees who have acquired plots in the provinces.

Committee met here under its chairman Nadim Afzal Chan Wednesday in parliament house to review audit observations in respect of ministry of housing for the year 2004-05.DG Federal Government Employees Housing Federation and Pakistan Housing Authority gave briefing to the committee about rules and regulations on allotment of plots to the officers of grade 20 and 21 in Islamabad but the committee expressed dissatisfaction over it declaring it incomplete.

Giving briefing to the committee DG Housing Foundation Tallat Rashid said that 5554 officers filed the applications under policy of allotment of plots to government employees in Islamabad on age basis and only 1800 persons could be provided plots.Declaring the allotment policy discriminatory, the committee summoned the list of the persons who had not been allotted plots.Committee was told that lists of federal government employees who had acquired plots during their induction in provinces had been called but only 3 provinces had sent replies.

The committee directed the chief secretaries to provide lists within a week otherwise the matter will be referred to NA committee on privileges.Chairman PAC said that committee wanted that a non discriminatory policy be adopted in connection with allotment of plots to government employees and it should not give any impression that committee was opposed to allotment of plots to employees. “We want homes rather than plots be provided to government employees and prime minister has held out assurance on implementation of committee’s recommendations. If these recommendations are not implemented I will move the case in Supreme Court on my own, he held.

Committee was told that plots were allotted to 481 persons including officers, politicians and other people from the provinces under the directives of the then prime minister in 1995. The committee summoned list of the persons to whom plots were allotted. – Onlinenenws