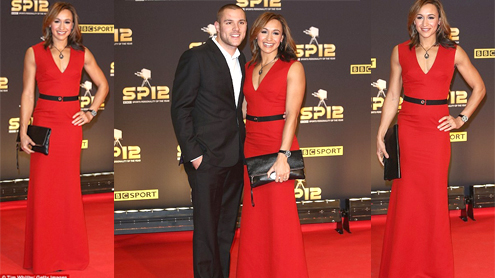 She’s had a stellar year, becoming golden girl of the 2012 Olympics.And it seems Jessica Ennis isn’t only a winner on the track but in the fashion stakes as well.

The gold medal Olympian lead the glamour at the BBC Sports Personality Of The Year Awards on Sunday night, turning up in a ravishing red floorlength dress.And her stunning look even caused a Twitter storm with fans hailing her as the new ‘rear of the year’, taking over from Pippa Middleton.The sister of the Duchess of Cambridge has had a flurry of interest since the world saw her derriere in her bridesmaid dress at the royal wedding last year.

But Jessica’s appearance at Sunday night’s awards has caused online devotees to comment on her physique in droves.One even wrote: ‘Move over pippa @J_Ennis is now Queen of the bottom! #spoty.’Looking a far cry from her look on the field, Jessica stunned the crowds in the scarlet number.She completed her look showing off her slender toned waist with a thin black belt around her middle, while she even showed off some skin with the plunging neckline.

Ennis even accessorised to perfection holding a large black clutch with her hair worn down and sleek.Not usually allowed to wear jewellery during her competitions, the 26-year-old made the most of her glamorous night out with a cute pendant adorning her neck.And she also came armed with the ultimate accessory – fiance Andy Hill looking proud and dapper in his suit next to her.Another fan wrote on Twitter: ‘Pippa Middleton is seething with jealousy at all the attention Jessica Ennis’s bum is getting on Twitter right now,’ while another commented: ‘How do I vote for Jessica Ennis’s bum? #ports personality.’

But she wasn’t the only sports personality to stand out on the red carpet.Swimmer Rebecca Adlington also dressed to the nines, showing off her figure in a plunging black halterneck dress.And it seems black was the popular choice for the night as many of the sporting stars played it safe in dark ensembles.Even Strictly star and gold Olympic cyclist Victoria Pendleton showed up in a simple black shift dress.She showed off her long dark curly locks, while going for bare legs and chunky heeled shoes.

Gymnast Beth Tweddle also went for black, although dressed it up with lace detailing as she brought boyfriend Steven Cryer along in tow.Sally Gunnell was also among those in black, opting for an asymmetric cut and sheer tights for presenting duties.Britain’s top sport stars gathered on Sunday night to celebrate their greatest ever year at the BBC’s Sports Personality of the Year awards, with the Duchess of Cambridge set to present the main prize after recovering from illness.

Olympic and Paralympic heroes dominated this year’s shortlist, with golfer Rory McIlroy the only one of the 12 nominees not to have won medals at London 2012 this summer.Cyclist Bradley Wiggins was the bookmakers’ odds-on favourite after his historic triumph in the Tour de France and gold in the Olympics time trial, followed by heptathlon champion Jessica Ennis.Mo Farah, double gold medallist in the 5,000 metres and 10,000m, was ranked third favourite with the bookies, just ahead of Andy Murray, who became the first British man to win a grand slam singles title for 76 years when he triumphed in the US Open and won an Olympic gold.The list of nominees had been extended from 10 to 12 this year to reflect the incredible year for British sport.It was aslo the Duchess’ first public appearance since leaving hospital for severe pregnancy sickness when she presented the main award as well as the lifetime achievement honour to Lord Sebastian Coe.