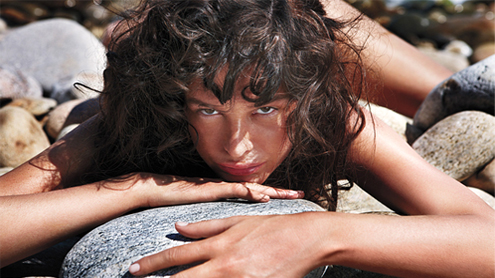 Paz De La Huerta covers Playboy magazine – but not herself – for the new issue of the gentlemen’s magazine.

The 28-year-old actress poses completely nude in a beach shoot for famed photographer Mario Sorrenti.Former Boardwalk Empire star Paz opens up about her love of nudity in the accompanying interview – saying it is something she does not have an issue with.Last month the actress was pictured undressing in the middle of a car park in Miami.

And if there was any doubt about her lack of bashfulness when it comes to baring all, then the Playboy spread certainly clears up her stance.In the cover shot, Paz leans forward protectively while sat on a rock with the ocean crashing around behind her, strategically placing a hand in front of her.

She told the publication she was proud to grace its pages.’Cindy Crawford and Marilyn Monroe have appeared in Playboy. I celebrate nudity every day. It’s our first wardrobe,’ she reasoned.Paz first posed nude for Sorrenti around 11 years ago.’I did my first nude shoot with Mario when I was 17,’ she revealed.’He made me feel beautiful, and I really feel it was on that shoot that I overcame my fear of being naked.In another shot, Paz stands naked on a decking area outside a house while in another she straddles a log with the sea in the background.The actress appears in the January/February 2013 issue of Playboy. – Dailymail