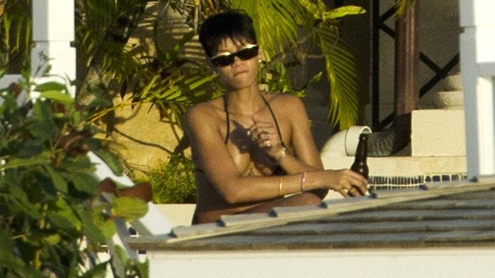 Maybe all she needs is a little sun to get over her recent heart break.Rihanna is staying in a luxury beach front villa in Barbados for a much needed vacation after her split from on-again, off-again boyfriend Chris Brown.

The Diamonds singer was spotted Tuesday at the resort — not the $21million Sandy Lane estate as had been previously reported — walking around her cosy pad in a tiny green and gold string bikini.Rihanna, who was raised on the small Caribbean island before coming to the United States as a teen to launch her music career, arrived in Barbados late on Tuesday, tweeting a picture of her bed on her plane ride over.

The 24-year-old songstress took a quick flight after her performance on the finale of The Voice USA, where she sang her latest hit, Diamonds, wearing a Swarovski embroidered tuxedo jumpsuit by Lanvin.She also tweeted a photo of herself on Tuesday with a new tattoo of a marijuana leaf on her backside, with the caption ‘thuglife’, and another of herself covering her face with a cap and coat.’Either way, you’re fuct!’ the picture read, referring to the brand label on her clothes.

The Diamonds singer – who just splashed out $12 million on a new home in the Pacific Palisades in Los Angeles – will join a raft of celebrities who traditionally decamp to the island, including X Factor supremo Simon Cowell, Top Shop billionaire Sir Philip Green, as well as a host of music executives.

The 24-year-old singer, who has a net worth of $72 million, always returns to her native Barbados for Christmas, and was reported to be joined by Chris Brown before their very public split this week.Rihanna was left reeling after Chris was pictured partying with scantily-clad girls on tour in Paris and enjoying a meal with his ex-girlfriend Karrueche Tran in Dubai and vented her feelings in a note to her fans.The model’s best friend Christina Milian, 31, claims Karrueche has always been the ‘Turn Up The Music’ singer’s ‘girlfriend’ despite Chris previously announcing they had split last October.

When asked about her friend’s relationship status with the 23-year-old R&B star, The Voice USA star said last week on The Wendy Williams Show on Friday: ‘You know what, from what I’ve always known, she’s his girlfriend.’And that’s where it lies for me. I see everything in the media. I really don’t get into the detail of it, but I think everybody has their own life and how they deal with things. They have the right to handle it how they want. I think they make a great couple.’

Chris released a statement last October, admitting he had broken up with Karrueche after nearly a year of dating because he wanted to focus on his ‘friendship’ with Rihanna.The Diamonds singer recently confirmed her split from Chris, just months after they reconciled even though Chris is still on probation for beating her up in 2009.In response to Chris’ recent outing with Karrueche, Rihanna posted an eCard on her Instagram on Tuesday: ‘Being single sucks. The only thing I get to do anymore is whatever the f**k I want to do (sic).’

The superstar also uploaded a photograph to Twitter of a heartfelt letter, thanking fans for their constant support and later posted the messages: ‘Examine what you tolerate’, ‘Goodbye muthaf*****’, ‘You give, you get, then you give it the f*** back’ and ‘Claps for the basic b****** (sic)’In between posting raunchy images of herself, she followed it up, musing: ‘Never underestimate a man’s ability to make you feel guilty for his mistakes.’ – Dailymail