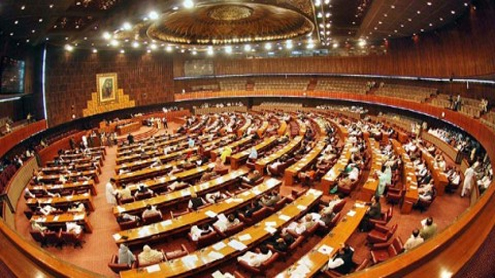 ISLAMABAD: Parliamentary Secretary for Finance Sajjadul Hassan on Wednesday apprised the National Assembly (NA) that the Council of Common Interests (CCI) would take the final decision on holding a population census in the country.

He said the house listing operation, which was a part of the census, had been completed in the year 2010-11 and now the CCI would decided on the time-frame for holding a population census across the country.Carrying out the census, he said, was a constitutional requirement because the retrieved data provided benchmarks for socio-economic developments plans and administrative activities, provided basis for political representation, equitable distribution of public funds to federating units and quota for all civil positions in the federal government.

Several members of the NA on Wednesday expressed concerns on the prevailing law and order situation and demanded Interior Minister Rehman Malik for prompt action to curb the menace of terrorism.Members from Punjab, Balochistan and KPK called upon the federal as well as concerned provincial governments to take stern action against terrorists as the House adopted a resolution moved by an MQM member from Sindh to condemn the brutal killing of polio workers.Riaz Hussain Pirzada said terrorists were targeting border areas as well as defense installations and questioned as to who was harbouring this menace and providing funds for such operations.

He said killers and mafias were given security while courts released accused terrorists for lack of sufficient evidence while billions of rupees were being drawn from the national exchequer in the name of security.Pirzada said Pakistanis, already bearing the brunt of power outages and gas load shedding, were living miserably on account of incidents of terrorism.Abdul Qadir Baloch said in 11 districts of Balochistan, even the elected representatives could not raise a voice against the terrorists because after doing so there was no guarantee of their security.

He said it was the responsibility of both the federal and the provincial governments to curb terrorism and bring the terrorists to justice. He demanded the Interior Ministry to improve its performance and ensure actions against culprits involved in killing of two lady polio workers in KPK.The member further stated that in a number of areas of his province, police stations remain closed and the complainants roamed from pillar to post to get their FIRs registered.

Baloch also demanded delimitation in Balochistan stating that his constituency alone covered an area of 65,000 sq km while the whole area of KPK was 72,000 sq km. “How can I execute an election campaign in such a vast constituency and reach out to my people to resolve their problems,” he said.

The NA was also informed that validity period of passports has been enhanced up to ten years, effective from 1st November, 2012.Parliamentary Secretary for Interior Rai Mujtaba Kharal told the House that problem of delay in the issuance of passports to the citizens had been resolved. He said one hundred and fifty thousand passports had been delivered during the last fifteen days and the remaining one hundred thousand would be available by the end of next week, clearing the backlog completely.