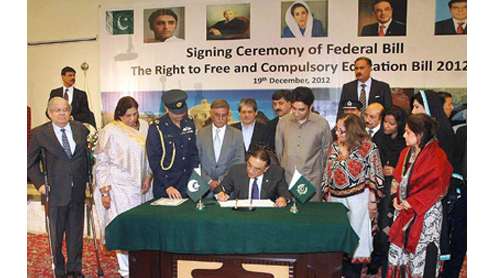 KARACHI: President Asif Ali Zardari on Wednesday signed “The Right to Free and Compulsory Education Bill-2012” at a ceremony held here at the Chief Minister House.

The Parliament had recently passed the education bill. After the assent of President Zardari it has become a law.The President congratulated the Parliament for passing a very important bill.Through this bill, the right to free and compulsory education for all children aged between 5 to 16 years has been recognized. – Brecorder

FBR to back MPs over ‘leaking of tax details’