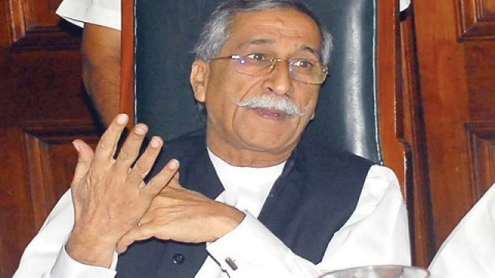 LAHORE: As Speaker Rana Iqbal gagged the voice of a Saraiki Soba by disallowing the provincial lawmakers from talking about the issue on the floor of the House, the Punjab Assembly was told on Thursday that over 50 percent posts of teachers at rural schools and colleges were lying vacant as no one wanted to serve in the countryside.

Rao Kashif, who gave the above information to the House, failed during the Question Hour to answer questions and the opposition strongly criticised his performance as the parliamentary secretary for education. The Speaker, too, expressed his dissatisfaction over Rao’s wrong or incomplete or outdated answers on different issues and advised him to prepare well before answering any questions when he comes to the House next time otherwise he would take serious action against his incomplete answers.

Earlier, legislators belonging to southern Punjab were disheartened on Thursday when Speaker Rana Iqbal, following the policy of Muslim League Nawaz’s provincial government, snubbed the voice of ‘Saraiki Soba’ (Saraiki province) as a separate province and disallowed the members to raise the issue in the Punjab Assembly.

Though both the treasury and opposition benches had passed a joint resolution in favour of the provinces of Southern Punjab and Bahawalpur some six months ago and National Assembly Speaker Fehmida Mirza constituted a special commission to decide the fate of the new provinces, unfortunately the PML-N’s leadership has less interest in the matter and still has not provided names of two members of the provincial assembly for completion of the commission. The PML-N leadership says it will not endorse separation of any Punjab area on the linguistic basis and that it will favour constituting new provinces only on the administrative grounds.

The MPAs, especially those belong to the Pakistan Peoples Party (PPP) and the Pakistan Muslim League Quaid (PML-Q) from southern Punjab, have raised the issue in the House several times and have demanded that the government provide two members for the national commission but no one bother and take it seriously. On Thursday, the Punjab Assembly session started one hour and 12 minutes late to its schedule at 10 am under the chairmanship of Speaker Rana Iqbal. Soon the House adopted the Question Hour regarding Higher Education Department and Parliamentary Secretary for Education Rao Kashif answered the queries.

After the Question Hour, the PPP-backed lawmaker from Southern Punjab, Athar Gorchani stood on a point of order and asked the Speaker that he should inform the House about why he was not giving the names of two members for the national commission on new provinces. He further stated that this was a discriminatory attitude of the treasury that it was using delaying tactics to stop the people of Southern Punjab from getting their separate province.

Gorchani was yet elaborating his point of view on the issue when the Speaker muted his mike and said that he would not allow anyone to talk on the matter on the floor of the House. “If anyone wants to discuss this issue, they should join him in his chamber where I will explain details of the issue to them,” Iqbal said. On this, Gorchani recorded his protest loudly (when the mike was off) and refused to discuss the issue at the Speaker’s chamber. He further said that it was a matter of interest of hundred of thousands people of Southern Punjab so the Speaker should informed the House about the problems if he have to give names for the commission.

Anyhow, the Speaker did not allow him to continue his speech more on the said issue saying that he should meet him in his chamber if he needs to know the issue. At this stage some other parliamentarians belongs to opposition from southern Punjab areas like Ahsanul Haq Nolatia strongly protested against the Speakers act declaring it as discriminative attitude towards deprived people of the province.

On a query from Majida Zaidi about the appointment of director general of Public Libraries Punjab, the parliamentary secretary accepted that the DG’s appointment was not according to the merit as he was not qualified for the job. But he insisted that the chief minister could relax rules for any appointment. The opposition said that according to the rules, only a PhD holder can be posted as the DG of libraries. (The sitting DG is MA English.) The opposition said that Chief Minister Shahbaz Sharif was not following the policy of merit.

Humera Awais raised the question about the failure of the online system of intermediate boards and the Speaker directed the parliamentary secretary for education that the system should make accurate to facilitate students immediately. Interestingly, when the Speaker did not allow the opposition members to speak on the Saraiki Soba issue, one of the PML-Q female lawmakers, Seemal Kamran, pointed out the quorum and being told of the lack of quorum from a treasury member, Speaker Rana Iqbal adjourned the session until today (Friday). – Dailytimes