Highlights of Book on four Years of Government’s Performance 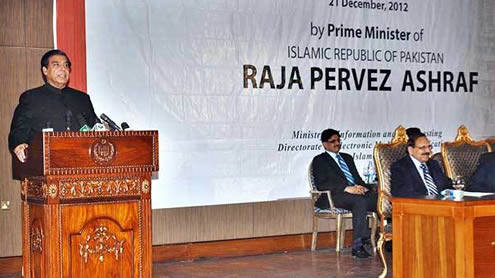 ISLAMABAD: Following are the salient features and highlights from the book “Reconciliation, Reforms and Revival: Four Years of Democratic Government (2008-12)” published by Ministry of Information and Broadcasting based on the achievements of the present PPP led coalition government which was launched here on Friday.

Prime Minister Raja Pervez Ashraf was the chief guest at the launching of the book held here at Prime Minister Secretariat which was also addressed by Minister for Information and Broadcasting Qamar Zaman Kaira, Research and Policy Advisor of Ministry of Information and Broadcasting Amjad Bhatti, who is also the editor of the book, and Director Pakistan Studies Center University of Karachi Dr Syed Jaffar Ahmed presented the book review.

Following are the highlights and excerpts from the book:

Rihanna Relaxes in a VERY low-cut monokini after wild shopping

Rihanna Relaxes in a VERY low-cut monokini after wild shopping