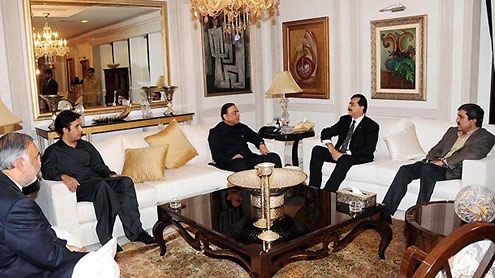 ISLAMABAD: After handing over the party’s reins to Mian Manzoor Ahmad Wattoo in Punjab, who joined the PPP only in May 2008 after winning a National Assembly seat in last elections as an independent candidate, President Asif Ali Zardari has brought another outsider as new governor of the province.

Many within the PPP and outside are agog over the selection of governor-designate Makhdoom Ahmed Mehmood who, until his nomination as new constitutional head of the province a few days ago, was the provincial president and MPA of the Pakistan Muslim League-F.  PPP sources, who claimed to be privy to the development, believe that Mr Mehmood has been chosen for the gubernatorial job on the insistence of former prime minister Yousuf Raza Gilani. However, they are not sure if the move would result in any worthwhile political dividends for the PPP in coming general elections. Talking to Dawn, a senior PPP leader said the decision to replace governor in Punjab was taken early this month during President Zardari’s visit to Multan.

At a meeting there the party leadership finalised its election strategy for southern Punjab. During the meeting, he said, it was decided that Mr Gilani would lead the party’s election campaign in southern Punjab. It was then that Mr Gilani demanded replacement of governor and President Zardari agreed. The PPP leader said: “It’s purely a political decision and with its implementation the party wants to further strengthen its hold in south Punjab. President Zardari accepted Mr Gilani’s proposal because the family of new governor, whose father Makhdoom Hassan Mehmood was the last chief minister of Bahawalpur state, had been a strong proponent of a Seraiki province. The PPP leadership hopes that the decision will help revive Seraiki nationalism before next elections.” Of around 50 National Assembly seats from the Seraiki area, the PPP and its ally PML-Q have more than 30 MNAs. Secondly, the leader said, after having a governor of his choice who was also his relative, Mr Gilani would use governor house as his camp office for his political activities in the province.

He said that it was a big boost for Mr Gilani who for some time after his sacking by the Supreme Court in June seemed to have been lost in political wilderness. While there are some who predict a strong support for the PPP in the southern belt of Punjab after Mr Mehmood’s jumping on the bandwagon, others see the move as an indicator of frustration on the part of the party leadership. They said that by appointing a man not associated with the PPP, the party leadership had virtually admitted its defeat at least in Punjab before general elections. A senior political commentator from the region said that although Mr Mehmood’s family was well-known in Rahim Yar Khan district and adjoining areas, it had remained pitted against PPP candidates in all the previous elections.

“Throughout 90s, the family was associated with the PML-N but Mr Mehmood joined hands with the ruling PML-Q in 2000s. In 1999, when General Musharraf grabbed power after staging a coup against the then prime minister Nawaz Sharif, Mr Mehmood joined his cabinet. In 2002, he was elected district nazim of R.Y. Khan with the blessings of Choudhrys of Gujrat. Choudhry Pervaiz Elahi, incumbent deputy prime minister, won a provincial assembly seat from R.Y. Khan with the backing of Mr Mehmood and became chief minister of Punjab.” Secondly, the analyst argued, Mr Mehmood might be influential in the constituencies for two to three National Assembly seats and five to six Punjab Assembly seats in R.Y. Khan, but in the rest of Seraiki area he wouldn’t be able to make any difference.

“Unlike central and northern Punjab, here in the Seraiki belt we have family-controlled constituencies, hence, it’s the candidate and not the party which matters in the end,” he said. Moreover, he said, alliances for upcoming elections would only become clear after the announcement of election schedule. Let’s see whether Mr Mehmood would be of help to the PPP or not, he added Another observer of the PPP’s politics said that the party lacked a single leader who could solely lead an election campaign throughout Punjab. Therefore, he said, the party had decided to try Mr Wattoo, who was known for making and breaking alliances, in the central Punjab. Prime Minister Raja Pervez Ashraf and the Kairas would be handling party affairs in the north of the province, he said. – Dawn