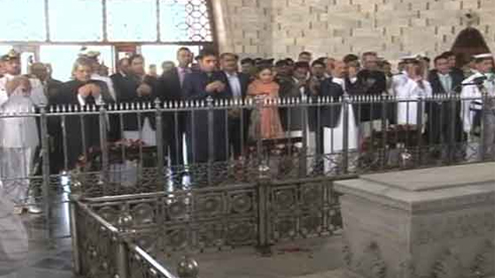 PPP chairman along with Sindh CM Qaim Ali Shah and Governor Ishratul Ebad also visited the Quaid mausoleum, offered fateha and laid floral wreath on the grave.A number of programmes have been chalked out to highlight the guiding principles of unity‚ faith and discipline of Quaid-i-Azam.

In their messages on the occasion the President and the Prime Minister have urged the nation to forge unity in their ranks and rededicate themselves to ideals and principles upheld by the father of the nation.In his message‚ President Asif Ali Zardari said Quaid s birthday is an occasion to reiterate the resolve to defeat dark forces in seeking to undermine the nation s founding principles.

He said let us pledge today to eliminate the menace of extremism and militancy working against democracy‚ constitutionalism and rule of law.Prime Minister Raja Pervez Ashraf in his message urged the people to work for the progress and prosperity of the country by rising above religious and sectarian differences. He said the PPP government will make Pakistan a welfare state free from all sorts of exploitation. – Dunyanews

Murder Weapon of the Future: The Smartphone