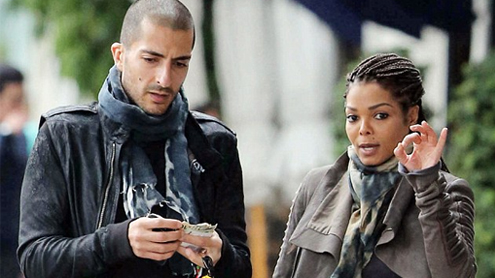 She’s kept a low profile for much of this year.But Janet Jackson has reportedly become engaged to Qatari billionaire Wissam Al Mana, whom she’s been dating since 2010.

The 37-year-old businessman ‘gave her a huge, expensive ring’ and the 46-year-old pop star is so afraid it will get lost, ‘she keeps it locked up,’ according to Us Weekly.Wissam is the managing director of Al Mana Retail, which represents A/X Armani Exchange, and he’s a shareholder in the Saks Fifth Avenue.Janet’s wealthy beau plans on sparing no expense for their spring nuptials in Qatar, and ‘he is flying in all of Janet’s friends and family on private jets.’

One source said that the pair’s ceremony will undoubtedly be ‘a circus,’ and Al Mana plans to hire a ‘top chef to create a custom menu.’The Miss You Much hitmaker, who’s almost a decade older than her Middle Eastern man, wants to start a family as soon as possible.’If she can’t have them, she will adopt,’ said a Jackson insider.The Nutrisystem spokesperson was last seen with the luxury-brand mogul shopping in West Hollywood earlier this month, and in July the loved-up couple were spotted laughing on a yacht in Sardinia.

Janet, who’s net worth is estimated at $150 million, has been married twice before.In 1985, she had her marriage to childhood friend and singer James DeBarge annulled after eloping only months earlier.And in 1991, she secretly married dancer, songwriter, and director René Elizondo, Jr., but the longtime couple divorced in 2000.Two years later, the Rhythm Nation songstress began her on/off seven-year relationship with record producer Jermaine Dupri.

In the past, Jackson was linked to actor Rob Lowe, Hollywood screenwriter Gary DeVore, rapper Q-Tip, actor Matthew McConaughey, and Boyz II Men’s Wanya Morris.A spokesperson for Janet did not immediately respond to a request for comment when contacted by Mail Online. – DailyMail