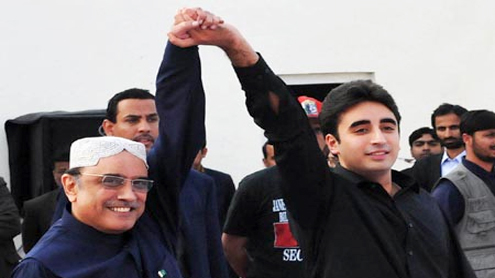 GARHI KHUDA BAKSh: Pakistan People’s Party (PPP) Chairman Bilawal Bhutto Zardari said that we want justice from the courts adding that the workers are waiting for the decision of Zulifkar Ali Bhutto reference.

Addressing a big public gathering at Ghari Khuda Bukhsh on the occasion of 5th death anniversary of Benazir Bhutto‚ Bilawal Bhutto questioned the judiciary and the Supreme Court (SC) for ignoring the PPP’s cases in favor of other cases and said we want justice from courts.He said that judiciary is independent now and all the institutions have powers instead of powers with one person in the past.Bilawal said BISP is also fulfilling needs of the poor about education‚ training and health.

He pointed out that the PPP Government faced enormous challenges due to global recession and terrorism but despite that our economy is standing firmly on its feet.Exports crossed 25 billion dollar mark this year‚ foreign exchange reserves stand at 14 billion dollar‚ KSE index has gone beyond 16‚000 points and inflation has come down from 25 to just 9 percent. He said Pakistan was wheat importing country but now is wheat exporting country.

Bilawal Bhutto Zardari said the so called flag bearers of democracy tried to hinder the way of Shaheed Benazir Bhutto. Our opponents have still not learnt any lesson from the past and they are still working to derail democracy in the country. However‚ they will not be allowed to succeed in their designs. He said the caravan of Pakistan People’s Party will continue its march for the welfare and well being of the people and strengthening of democracy.

Bilawal Bhutto Zardari said that blood of Benazir Bhutto is running in his veins and pledged that Pakistan People’s Party will neither allow any dictator to snatch rights of the people nor the terrorists to terrorize the people. He assured that his party will continue to follow the mission of Shaheed Zulfikar Ali Bhutto.He said the PPP is not only the name of a political party but also it is a life for the people. He said Shaheed Benazir Bhutto lives in our hearts and we will work for the accomplishment of its vision for Pakistan.

He also paid tribute to Slain KP minister Bashir Bilour and Malala Yousafzai saying ‘if one Malala is attacked, then thousands of Malalas will be born’.He said that the PPP govt restored the constitution given by Shaheed Zulifkar Ali Bhutto and ‘Roti, kapra aur makan’ was the PPP’s slogan in the past, and it is still our slogan.’We want to move forward in cooperation with all the political parties of this country’, he said.

Bilawal said that Zia-ul-Haq and Pervez Musharraf’s uniforms were ignored, but the PPP co-chairman’s dual office is constantly used against us.Earlier addressing the public meeting‚ the former Prime Minister Yousuf Raza Gilani said that those who are hatching conspiracies against Peoples Party will fail in their designs.

Enumerating achievements of PPP led government he said that under the leadership of President Asif Ali Zardari the PPP government achieved many goals like giving rights to the provinces‚ renaming Khyber Pakhtunkhwa‚ reforms in FATA rules and political freedom in the country.He said PPP is the heir of martyrs as Mohtarma Benazir Bhutto Shaheed had said after Karsaz blast that she is the heir of these martyrs who sacrificed their lives for democracy in the country.

The PPP leader Jehangir Badar said that Shaheed Benazir Bhutto courageously resisted the dictatorship and succeeded in restoring democracy in the country.He said that we would continue to work for fulfilling mission of Shaheed Benazir Bhutto.He asked the PPP workers to utilize their energy for winning the forthcoming general elections by the party.

The PPP leader Raza Rabbani said that Shaheed Benazir Bhutto still rules over the hearts of the Pakistani people.He said Shaheed Zulifkar Ali Bhutto and Shaheed Benazir Bhutto did not compromise on their principles.He said the PPP government has abolished anti labour laws.Referring to long march and tsunami ultimatums given by some political parties in the country the PPP stalwart Senator Aitzaz Ahsan said that PPP believes on ballots‚ not on swords.

The Extravagant Melodrama of ‘Les Miserables’