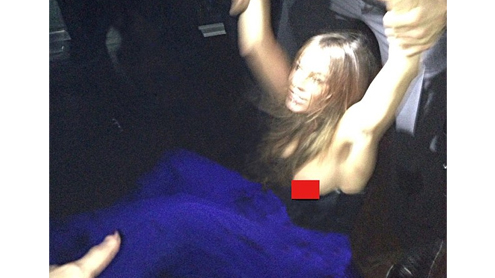 Her New Year’s Eve celebrations ended in some disarray when she and her fiancé Nick Loeb became embroiled in a scuffle at a Miami club.

And Modern Family star Sofia Vergara suffered even more embarrassment when she accidentally exposed her cleavage during the melee.A new photograph shows the star being helped up from the ground, while her breast slips out of her plunging leather top. The star is well known for squeezing her famous curves into an array of tiny ensembles.Sofia was partying with her fiancé Loeb and friends, when he was allegedly thrown out of  Miami Beach club Story after they had a ‘heated argument.‘

According to the New York Post, things were already awkward because Loeb was jealous that the pair’s evening was being hosted by the club’s owner Chris Paciello, who Sofia dated in the 1990s.The publication reports that the situation became heated when Loeb found himself in a struggle with a nearby table, after Sofia apparently had her picture taken with a stranger.Page Six reported: ‘Nick seemed tense around Chris, who was hosting them in the VIP section, even though he and Sofia are just friends. In the early hours, Nick and Sofia were arguing before he got into a dispute with somebody at a neighbouring table. Some pushing and shoving started.

‘Sofia stepped in to try to calm the situation, but somehow she ended up getting pushed and shoved also. Her strapless dress was torn or pulled down in the melee, exposing her cleavage in front of other people and her son Manolo who was so offended he left the club. It was crazy.’However, the newspaper alleges that despite the argument, Sofia forgave Loeb and the pair returned home together following the altercation.

MailOnline has contacted representatives of the couple for comment.Earlier in the evening, the Modern Family actress grinned happily while clutching a flute of champagne and smooched her beau throughout the night.Her outfit choice was dramatic and eye-catching. The empire waisted gown was a deep royal blue and had a plunging, daring leather corset top.

It fit the curvy Colombian like a glove and she wore her long brunette hair loose around her shoulders.She accessorised with simple jewels and her nails were painted a muted nude colour.Vergara mingled with the likes of singer Santigold who was a little more covered up in a long sleeved black and white dress.Mother-of-one Vergara and her businessman fiancé became engaged in July but have yet to set a date yet for the big day.The actress is expected to attend next weekend’s Golden Globe awards ceremony where her sitcom Modern Family has been nominated for a number of gongs. – DailyMail