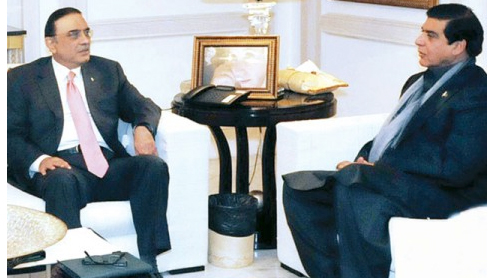 The meeting, held at Bilawal House which has been declared a presidential camp office, noted that if elections could be held in war-torn and strife-torn Afghanistan and Iraq, there was no reason that these could not be held in Pakistan on time as stipulated in the Constitution, said President’s spokesman Senator Farhatullah Babar.A four-member committee comprising senior party leaders was also formed for talks with political forces as well as the Punjab government on the current situation in connection with holding timely elections in a free and fair, transparent manner and confronting any challenge to it jointly.

Sources privy to the meeting said several party leaders criticised the role of MQM which, despite being a coalition partner in the federal and Sindh government, was participating in the long march against its own government. The meeting declared that though it was a democratic right of every party to hold protest and long march, but no adventurism to sabotage the next elections on the pretext of protest would be allowed. The meeting made it clear that elections would be held on time as stipulated in the Constitution and no delay, even for a day, would be permitted on any pretext.

The ruling PPP formed a four-member committee comprising Federal Minister Khursheed Shah, Senator Farooq Naek, Nazar Muhammad Gondal and Senator Raza Rabbani, giving it a task to talk to the political forces and the Punjab government on the current situation in connection with holding timely elections in a transparent manner and confronting any challenge to it.

It said no one would be permitted to deprive the people of their right to elect their representatives and choose their government.The committee will also meet PML-N Chief Nawaz Sharif as well as other parties, which are not in the parliament, and get their suggestions on the caretaker setup to ensure fair and free elections. Senator Farhatullah Babar said the meeting also expressed its determination to maintain law and order at all costs and protect the life and property of citizens against any adventurism and under all circumstances.President Asif Ali Zardari also held a separate meeting with Prime Minister Raja Pervaiz Asharaf, which was attended by former prime minister Syed Yousaf Raza Gillani, PPP Chairman Bilawal Bhutto Zardari and the party’s general secretary Senator Jehangir Badr.

They discussed the party affairs and decided to change some officer bearers in the four provinces.Meanwhile, Federal Law Minister Farooq H Naek and South Punjab President Makhdoom Shahabuddin called on Bilawal Bhutto Zardari separately at the Bilawal House. Law Minister Farooq H Naek briefed the PPP chairman on the legal issues pertaining to the government and the party. Makhdoom Shahabuddin apprised him of the political situation in South Punjab.Chairman Bilawal Bhutto Zardari said PPP was fully committed to the creation of South Punjab province as per the aspirations of the people of the area and hoped the initiative taken by PPP would ultimately provide due rights to the people of South Punjab. – Nation