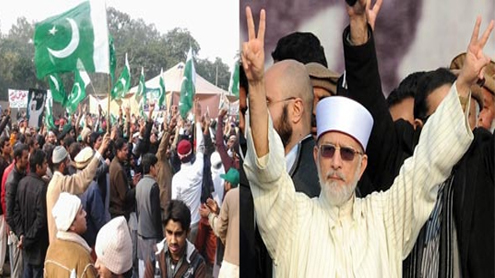 “We are about to reach the Islamabad interchange on Motorway. We want to reach a bit earlier than the participants coming from Lahore, Karachi and elsewhere to accord welcome to them,” said Pir Sajjad Badshah, central leader of the TMQ.According to him, the people of Khyber Pakhtunkhwa responded to the call of Tahirul Qadri beyond their expectations, as the convoy of 100 vehicles, which they started from Peshawar, was joined by scores of vehicles at Charsadda, Nowshera, Swabi and other points.

Pir Sajjad, who also heads Qaumi Amn Council in the province, said they had asked only those workers, who owned vehicles and had accommodation arrangements in Islamabad to leave on Saturday. The other members and supporters of the Tehrik and common folks would participate in the march today (Sunday) and tomorrow (Monday).Pir Sajjad believed that they were out to defend the state and were ready to bear every difficulty created by the federal or Punjab governments. He was, however, satisfied with the role of Khyber Pakhtunkhwa government.

Least concerned about the march and its outcome, the Khyber Pakhtunkhwa government has already announced not to create any hurdle for the marchers.Provincial Minister for Information Mian Iftikhar Hussain told The News that though they did not like the way and timing chosen by Tahirul Qadri for the protest, they would not stop the participants of the march, nor create any hardship for them. “We rather welcome them,” he said.

He was quiet impressed by the number of vehicles and people participating in the march. “So huge is the number of vehicles participating in the convoys that the roads have been blocked due to the rush, let alone the impediments created by the federal government to ban entry into the capital,” he said. Men and women are equally enthusiastic to be part of the march, he added. – TheNews