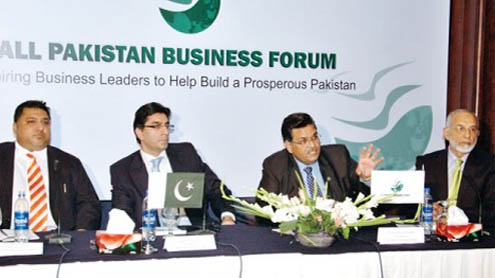 LAHORE: In view of overwhelming demand from all districts of the four provinces and overseas Pakistani business community, the establishment of “All Pakistan Business Forum (APBF)” has been announced with its representation in all four provinces of Pakistan as well as Gilgit Baltistan and FATA.

Addressing the executive committee meeting, Chairman Nabeel Hashmi, said that APBF is now a country-wide platform with international chapters providing forceful and effective representation of the business community. He congratulated the executive committee for the formation of districts boards throughout the country within a short period. He said that businessmen under the platform of APBF shall not only highlight issues pertaining to development of businesses but shall also participate in resolving the socio-economic issues confronting our country. “We shall provide solutions and, where required, assist in implementation of our recommendations” Hashmi said.

Overseas Pakistani businessmen have always been keen to contribute towards the development of Pakistan. APBF shall provide them a strong and credible platform providing information, joint venture possibilities and interface with a host of sectoral experts. The first APBF international chapter shall be inaugurated in the United Kingdom followed by the UAE.“In addition to providing facilitation to individual businessmen, APBF shall follow a unique approach to strengthen the business community as a whole. It is these entrepreneurs who are the real builders of Pakistan’s economy, he said.”

Chairman Syed Nabeel Hashmi also sought upgrading of facilities being offered by existing city Chambers of Commerce to its members. He suggested that R&D funds can be better utilized by building city specific data which is non-existent at present.APBF structure is based on district level representation. At district level, the organization is better positioned to collect data and draw up meaningful plans for future development and economic activity.

Speaking at the occasion, Central President Rashid Mehr, asked the district boards to set up standing committees for broad-based recommendations on education, health and social safety, governance, energy, and economic development. The goal would be to devise a comprehensive country-wide social and economic growth strategy evolved by the grass-root district level stakeholders. He stated that APBF is also working for better coordination amongst different business outfits and is putting in a system to resolve tax issues faced by the business community. Prominent business leaders, Pakpur foundation board members and visiting overseas Pakistanis also participated.