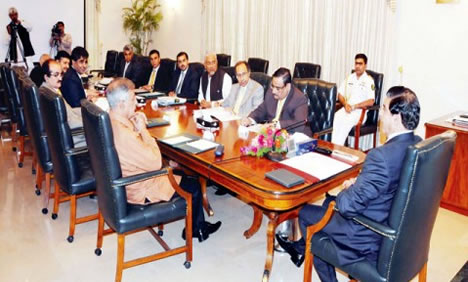 LAHORE: Prime Minister Raja Pervez Ashraf has sacked seven board members of the Lahore Electric Supply Company (LESCO), including its chairman, and ordered appointment of 14 new members in violation of the set procedure for removal and appointment of distribution companies’ members.

The changes have apparently been made to please Pakistan People’s Party leaders and workers ahead of the national general elections and to safeguard interests of some local businessmen and bidders. A letter dated February 22, 2013, a copy of which is available with Media, reads the prime minister has approved the nominations as directors of the LESCO board of Pervaiz Ashraf, Kamran Arshad, Mian Tariq Rahman, Moeed Yousaf, Muhammad Zakria Butt, Ashraf Bhatti, Tahir Khalique, Tanvir Ahmed Khan, Tanvir Tariq, Umair Siddique, Shaukat Saleem, Faraz Hashmi, Parvaiz Ahmed Khan and joint secretary DISCOs Ministry of Water and Power.

It is noteworthy that Sheikh Parvez Ashraf is a class fellow and college friend of Federal Minister for Water and Power Ahmed Mukhtar and is to now lead the LESCO board of directors as its chairman. Faraz Hashmi is a son of Asif Hashmi and is expected to contest election from Shahdara constituency, while another new member is Tariq Rehman, a son of Mian Misbahur Rehman and PPP MNA Yasmin Rehman.

The directors who have been removed from their posts include, LESCO BoD Chairman Ahmad Rafay Alam, APTMA leader Gohar Ejaz, Prof Jamshed Hassan Khan, Javed Hussain, Lahore Chamber of Commerce and Industries President Dr Khawar Daha and Inftikharul Haq of Privatisation Commission. Former federal secretary Nargis Sethi had moved a summary for these changes, however, its is noteworthy that she too has been replaced by Rai Sikandar, who is a Grade-21 officer and has been made secretary of the ministry despite being junior to Water and Power Special Secretary Himayatullah Khan and Additional Secretary Arshad Mirza.

Sources said that Moeed Yousaf, a nephew of the minister for water and power, has also been made LESCO BoD director. Zakria Butt, an active member of the PPP who is also a member of the current LESCO BoD, has been retained in the proposed board. Another new director is Tahir Khalique, who is a personal friend of the minister. Before taking the new charge he was working as public relations officer to the minister.

Sources told Daily Times that as per procedure only the Cabinet Committee on Restructuring (CCOR) is the body authorised to take such decisions. However, in this case the decisions have been made directly by the prime minister without taking onboard other members of the CCOR, which is a sheer violation of the rules and regulations. One of the removed LESCO director told Daily Times that all this happened just to please PPP leaders and some interest groups to get favour in the upcoming national general election. – Dailytimes