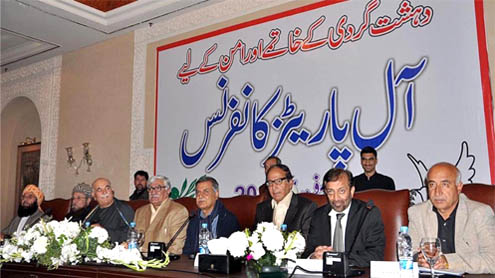 ISLAMABAD: The much-awaited All Parties Conference (APC) on Thursday provided a sketchy roadmap for the government to initiate a dialogue process with the Taliban, as the five-point joint communiqué issued at the end of the well-attended moot fell short of mentioning any role of the principle stakeholders – the security establishment of the country – in the talks.

Jamiat Ulema-e-Islam-Fazl (JUI-F) chief Fazlur Rehman, however, remained successful in assembling the top leadership of almost all the political parties of the country, sans the Imran Khan-led PTI, to send a strong message to all quarters that the political initiative, which should have been taken by the government, had been taken by his party. Even though the APC was attended by a galaxy of politicians including PML-N chief Nawaz Sharif, PPP chief Amin Fahim, Jamaat-e-Islami chief Munawwar Hassan, PML-Q President Shujaat Hussain, PML-F Senior Vice President Mohammad Ali Durrani, MQM’s Dr Farooq Sattar, PkMAP Chairman Mahmood Achakzai, ANP’s Afrasiab Khattak, and QWP chief Aftab Sherpao, the show was stolen by senior journalist Salim Safi, who gave the participants an overview of the entire situation on ground in FATA, Afghanistan and Khyber Pakhtunkhwa.

His revelations proved to be an eye-opener. Announcing the five-point joint declaration, Fazl said the implementation of the APC proposals would start from today (Friday).  Flanked by Achakzai and others, Fazl said all parties had backed the joint declaration. He said the APC completely supported the dialogue process with the Taliban. However, he did not mention whether or not the top political leaders including Nawaz, Hassan and himself would also go along with the grand jirga to meet the Taliban delegation. Following is the text of the declaration:  The APC proposes the following steps for peace and also supports the efforts of the grand jirga in this regard 1.

The number of members of the already-formed grand jirga be increased and the people from all schools of thought be included 2. A trust be established to fund and look after the families of martyrs, injured 3. The grand jirga should initiate talks with the parties concerned in guidance of all the political and religious parties 4. Practical steps should be taken to get rid of lawlessness across Pakistan and this APC supports any dialogue which could restore the writ of constitution and law of the land 5. All the participants of the APC, including tribal elders, announce that the incumbent government, the caretaker setup and the next government would be bound to the proposal of the APC The five-point agenda was authored by seasoned politicians including Durrani, Manzoor Wattoo, Afrasiab Khattak, Prof Ibrahim, Akram Durrani and Wasim Akhtar and Iqbal Zafar Jhagra.

Besides politicians, a large number of tribal elders, religious scholars and journalists were also present. It was for the first time that all the politico-religious parties joined hands for the cause of peace without putting forth any preconditions to the dialogue with the Taliban. Interestingly, PPP’s Qamar Zaman Kaira and Amin Fahim were seen sitting with the chief of Ahl-e-Sunnat Wal Jamaat – the new face of the banned Sipah-e-Sahaba Pakistan (SSP) – a party which is being accused by Interior Minister Rehman Malik as being an ally of the PML-N. An insider told Pakistan Today that during the drafting of the joint declaration, the PPP, PML-N, and the JI representatives made all-out efforts to make it into a vague and pointless document.

However, the source added that the majority opinion – that preconditions would be counterproductive and may lead to a deadlock – prevailed after a heated debate.  Ceasefire:  “It was also decided that a ceasefire would be announced as a confidence building measure once initial contacts with Taliban remain successful,” the source added.  Safi, in his speech, revealed that the TTP’s dialogue offer was actually made on advice by Afghan Taliban leadership and it was the last opportunity for peace with Pakistani authorities, failing which might make the upcoming general elections bloodiest polls. “I have the information that a batch of 150 suicide bombers has completed its training and its passing out parade has been made recently.

This death squad is dedicated for sabotaging general elections,” he said as there was pin-drop silence in the convention center where over 500 participants were present. Addressing the conference, Nawaz said the government should come up with a positive response to the Taliban’s offer for peace dialogue. “All the parties should play a positive role setting aside all difference as it is need of the hour,” he said, assuring the tribal elders sincere support of the all the parties participated in the moot. Nawaz said the law and order in the country was not satisfactory.

Talking about the efficiency of incumbent government, the PML-N chief said the report on the Abbottabad Commission was yet to be made public.  The economic situation in the country, law and order, foreign loans etc were among those issues, which were worsening day by day, he said, appreciating the sacrifices of tribal people.  “Conflict has never been a solution to any problem,” Nawaz said. On the behalf of the government, Fahim assured the attendees that his party would support all steps in accordance with the law and constitution.  Fahim said the PPP believed in democracy, rule of law and always took concrete measures for the welfare of the people.

The PML-Q president said every problem could not be solved through the use of force, therefore talks were necessary. Tribal politicians who were not invited to the moot had also expressed confidence in the conference’s ability to restore peace, he added. Dr Abdul Qadeer Khan also offered his services for the dialogue process with the Taliban, stating that talks were the way forward and he would be happy to assist this process. The JI chief said the government’s response to the Taliban’s offer for peace talks was not positive.  Sherpao said the talks should be held with the Taliban. He also rubbished any preconditions for the talks. MQM’s Sattar said peace in Karachi and Balochistan was tied to peace in FATA and there was a need to unite on the national agenda. – PT