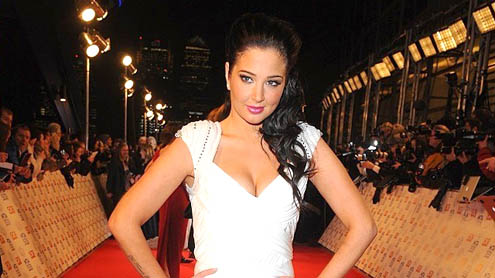 Contrary to reports this week, Tulisa Contostavlos has not been officially axed from the X Factor panel.She met X Factor executive producer Richard Holloway on Tuesday night, who told her: ‘It’s all still to play for.

A source close to the star tells me: ‘She’s realistic that she might not be back but Richard was very positive about her and said no final decisions had been made.’But as Simon Cowell’s annual X Factor chess game juggling the judging line-up continues at a pace, I’m told Sharon Osbourne may return to the UK show as a judge or make her debut on the U.S. version in place of Britney Spears.

My X Factor source says: ‘Simon hasn’t made his mind up. Sharon was about to sign up as a judge on Australia’s Got Talent but that’s now been put on hold so she can remain available for The X Factor if needed.’Last year’s most popular judge Nicole Scherzinger tells me she is yet to begin formal discussions with Cowell about returning. ITV bosses are desperate to keep her, although my sources say she could also be an option for the U.S. panel.It is a major change in fortunes for the former Pussycat Doll and girlfriend of Lewis Hamilton, who was axed from the US show after judging the first series in 2011. Mel B is another possibility.

‘There’s going to be an evolution, but not a revolution,’ a source close to Cowell says. Out of Louis Walsh, Tulisa and Gary Barlow, one or two are expected to go.For 23 years the BBC’s Have I Got News For You has been the most popular weekly panel show on British television, with ITV failing to launch a successful competitor despite numerous attempts.

But now a nasty war of words is developing after Hat Trick Productions — the independent producer of the BBC1 show run by comedian Jimmy Mulville — agreed to make a rival news panel series for ITV, angering some Beeb executives.Hat Trick filmed the pilot of Good News, Bad News this week, with comic Frank Skinner and presenter Gabby Logan filling the roles taken by Ian Hislop and Paul Merton on HIGNFY.

My BBC source says: ‘It’s understandable that ITV wants to try and make its own version of HIGNFY.’But it’s a bit of a low blow that Hat Trick has helped them do so. They’re an indie producer so there are no rules against it, but it feels wrong and hasn’t gone down well here.’Hat Trick says that Good News, Bad News would never air in the same Friday night slot as HIGNFY and argues the two shows are ‘significantly different’.Mulville, who starred in Channel 4’s Who Dares Wins and ITV’s That’s Love in the 1980s, tells me: ‘People would say I’d lost my mind if I was going to make a show that would damage Have I Got News For You. It would be a ridiculous thing to do.’

ITV says no decision has been made whether to go ahead with Good News, Bad News as it is also trying out four other panel formats.One possibility is that it would replace That Sunday Night Show, which I revealed has been axed.A BBC spokeswoman declined to comment.After turning round the ratings of the Brit Awards over three years, presenter James Corden and his producing partner Ben Winston want to reinvigorate the BAFTAs.

‘Let me and Corden at it,’ Winston tells me. ‘Big opening number, great sketches and real glamour. It would be huge. Why should the UK be so British?’BBC and BAFTA bosses are under pressure to mimic the success of the Oscars in America on Sunday.More than 40 million people watched Seth MacFarlane’s controversial hosting gig. – DailyMail