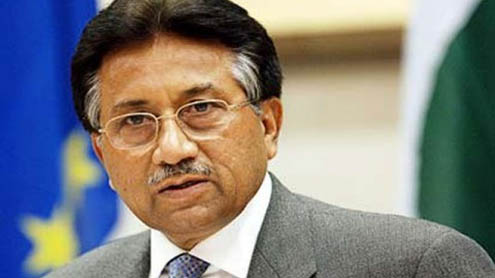 DUBAI: Former president and military dictator Gen (r) Pervez Musharraf announced on Friday that he would return to the country within a week after the interim government takes control.

Without giving a specific date, the former strongman made the announcement barely weeks before March 16, when assemblies are expected to be dissolved and a caretaker government appointed to oversee general elections in Pakistan.“I have decided that I will return to Pakistan within one week after the formation of the caretaker government, likely to be set up by March 16,” he told a news conference in Dubai.“When I look at these conditions that the country is in, I know that my return to Pakistan is crucial. And I will return to my beloved country,” he said. “Now or never, now or never!”

Addressing the issue of threats to his life and the cases against him in Pakistan, Musharraf said his life was in God’s hands, adding if he was being tried for promoting development and prosperity in Pakistan, he was ready to face the courts.The former president faces two court warrants for his arrest in connection with the 2006 death of Nawaz Akbar Bugti and the 2007 assassination of ex-prime minister Benazir Bhutto.

“People say that there are cases against me and there is danger. I am not afraid of dangers and I leave it to God,” Musharraf said. The All Pakistan Muslim League (APML) chief has been in self-imposed exile for five years since the PPP was elected into power with a coalition government in 2008.Musharraf said that he would land in Karachi, Islamabad or Rawalpindi and will face the cases in the courts. He said that his heart was ‘bleeding’ for his country. “I am not going to Pakistan to create enemies. It’s time for reconciliation. For all those who love Pakistan, I would like to tell them that I am returning to Pakistan because I love Pakistan.”

He also said “Religious terrorism is eating us from the inside. People are destroying Pakistan in the name of religion.”69-year-old Musharraf had launched his own political party, the All Pakistan Muslim League, in June 2010.Musharraf termed his return to Pakistan as very important for Pakistani politics and said that a viable and honest third force was critically required, adding he was not returning to settle any scores.Speaking about the Hazaras of Quetta, Musharraf said they were patriotic, patient and educated Pakistanis. Musharraf further added by remaining divided and fighting amongst each other religious extremism was destroying the country from within.

The former president said he was hopeful that the people of Pakistan had realised who is right and who is wrong as the country will be facing more pressures after the 2014 Nato withdrawal from Afghanistan.This is not the first time that Musharraf has announced his plans of returning to his country.Last year, he said he would fly home to contest elections. However, his plans of returning have yet to materialise. The former military chief had put off his scheduled arrival to Karachi in the last week of January this year on the reported advice of his well-wishers in the army.He told a group of supporters in New York last month that he had delayed his return because of security concerns. – Nation