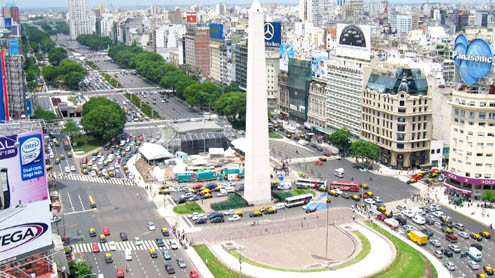 Not quite Latin America, not quite Europe, Buenos Aires is a delightful blend of old and new. Heavy on nostalgia yet youthful and dynamic, there is rarely a dull moment in the city known as the Paris of the South.

Argentina’s grass-fed beef is as good as it’s supposed to be, especially when washed down with the country’s famed Malbec wine. And while dancing the tango might not be for everyone, it’s worth getting a feel for the sounds and steps that give Buenos Aires its soul.The city also boasts fashionable nightclubs, a revamped dock area flush with luxurious skyscrapers, fusion cuisine and an extensive network of cycle paths for a bit of two-wheeled sightseeing.

Political passions and the country’s turbulent economic past are never far away in Buenos Aires. Don’t be alarmed by frequent street protests or dozens of illegal money changers offering to swap dollars and euros at a favorable, black-market rate in the city’s main shopping street, Florida.Reuters correspondents with local knowledge help visitors get the most out of a short stay in Argentina’s capital.

8 p.m. – Stroll from the city’s landmark obelisk monument down Corrientes Avenue, Buenos Aires’ answer to Broadway. Portenos, as residents are known, get dressed up for a night at the theater while literary types browse the many second-hand bookshops that stay open until the early hours.

9 p.m. Catch a play or a film at one of Corrientes’ numerous cinemas or head to the nearby opera house, the Teatro Colon (www.teatrocolon.org.ar). Built in 1908, when Argentina was one of the world’s richest nations, it offers a glimpse into the nation’s wealthier past. If you don’t fancy a show, guided tours are held every day from 9 a.m. to 5 p.m.

10 p.m. – Early dining is not fashionable in Buenos Aires, and Portenos often tuck into dessert well after midnight. Join the pre-theater crowd at Pizzeria Guerrin (Corrientes 1368) for a slice of pizza or two at the counter, literally rubbing shoulders with the locals.

11 p.m. – Buenos Aires’ rich Italian heritage is evident in the city’s many ice cream parlours. One of the best is Cadore (Corrientes 1695), where the dulce de leche with chocolate chips (dulce de leche granizado) is hard to beat.

11 a.m. – Enjoy brunch in fashionable Palermo, known for its leafy parks, boutique shops and trendy residents. The vast neighborhood is divided into Palermo Hollywood, because of its concentration of production studios, and Palermo Soho, which attracts a sophisticated, bohemian crowd. Savor Scandinavian-inspired cuisine at Olsen (Gorriti 5870) or French-style pastries and croissants at Le Ble (Honduras 5999). If you’re wistful for 1950s-era charm, settle on the high stools of El Preferido de Palermo (Jorge Luis Borges 2108), a small, grocery-style cafe.

12:30 p.m. – Browse through racks of stylish clothes or leather goods in Palermo’s plazas. Visit El Ateneo Grand Splendid (Santa Fe 1860), a majestic bookstore located in a stunning former theater. Dive into works by Jorge Luis Borges, Argentina’s best-known author, at the cafe located on what used to be the theater’s grand stage.

2 p.m. – On a sunny day, stroll over to the Japanese Gardens. If it’s raining, hail a taxi and head to the MALBA museum (Figueroa Alcorta 3415), which features works by contemporary Latin American artists, or to the National Museum of Fine Arts (Libertador 1473), which houses a collection including European paintings and sculptures. The MALBA has an excellent restaurant and a patio area for a lunch-time break.

5:30 p.m. – Wander through the maze of imposing, stone-built tombs at La Recoleta Cemetery, where the city’s rich and famous are buried. Visit the grave of Eva “Evita” Peron, but be prepared for the tour groups.

9 p.m. – Take a nap at your hotel and then indulge in a parrilla, a typical steakhouse where you can sample the country’s world-famous beef. Tuck into tender sirloin and fillet steak at the wildly popular Gran Parrilla del Plata (Chile 594), or at the more rustic Desnivel (Defensa 855).

11 p.m. – Put on your dancing shoes and head to Buenos Aires’ tango halls, known as milongas. A boom in tourism has revived the appeal of the nostalgic dance, which was born in the city’s immigrant neighborhoods. Visit La Viruta (Armenia 1366), where you can take a quick class or stay on for the milonga if you’re a more confident dancer. For a more atmospheric setting, try La Catedral (Sarmiento 4006).

10 a.m. – For breakfast try some buttery pastries and coffee in the picturesque Boca neighborhood, which was chiefly settled by working-class Italian immigrants. Simple wooden homes have cheerful pastel-colored facades, coated with leftover boat paint, and artists perform on the cobbled streets.

11 a.m. – Stroll through the crowded Caminito street, pausing to buy souvenirs on your way to the Bombonera soccer stadium. Swing by the epic blue and yellow venue where Diego Maradona played his last game.

1:30 p.m. – Hop on a bus, or trek 30 minutes north, to lunch at a bustling restaurant in the artsy San Telmo neighborhood. Settle down at the popular bistro Cafe San Juan (Avenida San Juan 450) or try a typical cold meat and cheese platter (called a picada) at the old-fashioned Cafe La Poesia (Chile 502).

3 p.m. – Mingle with mime artists, artisans and tourists at the San Telmo flea market. Wander the stalls laden with vintage jewelry and retro posters of the city.

5 p.m. – Wrap up your weekend in the political heart of the city. Walk up to the Plaza de Mayo to pose for pictures in front of the pink presidential palace, where Evita famously waved to her supporters. In the dark days of the 1976-83 dictatorship, the mothers of missing political dissidents gathered here to draw attention to the plight of their children and continued to meet weekly after the country’s return to democracy. Nearby, veterans of the 1982 Falklands War have set up camp to demand better pension benefits. – KahleejNews