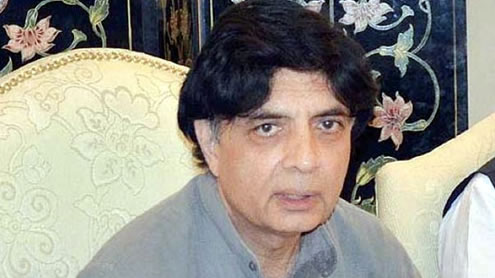 LAHORE: Leader of Opposition in National Assembly Chaudhry Nisar Ali Khan has said that all opposition parties have agreed on two names for caretaker prime minister, but more consultations are needed to replace one of them because of some ‘problems’ regarding him.

“A consensus has been developed not only within the PML-N but also among the opposition parties,” he told reporters in the presence of Mian Nawaz Sharif here on Tuesday. However, he said, there were some problems with one of the two probable nominees and the consultation process would be resumed to pick a name in his place. He did not say anything about the problems but PML-N sources said the second nominee, a retired judge, did not meet part of the criteria set for the post. Chaudhry Nisar said a decision on the new nominee would be reached in a couple of days and both the names would be conveyed to the prime minister.

He said there were difficulties on the issue of caretaker set-ups in Balochistan and Sindh. There is no opposition in Balochistan, while in Sindh a government ally has occupied the post of the leader of opposition in the provincial assembly after enjoying power for almost five years. “The PPP and MQM are conniving in Sindh to benefit from being both in the government and the opposition at the same time,” he said, referring to appointment of MQM’s Sardar Ahmed as the leader of opposition while the same party’s man (Ishratul Ibad) continued to hold the office of provincial governor.

He warned that the PML-N would link the dissolution of Punjab Assembly with the Sindh opposition leader’s issue if the post was not given to the genuine opposition there. Other opposition parties were being consulted in this regard, he said. Replying to a question, Chaudhry Nisar said the Tehrik-i-Insaaf would be approached through the Jamaat-i-Islami. He claimed that PTI chief Imran Khan had given the names of Razzaq Daud and Shoaib Suddle for caretaker prime minister but later backtracked.

PTI information secretary Shafqat Mahmood denied that his party had been approached regarding the caretaker set-up, although it had expressed its readiness to cooperate if contacted formally. He said they had learnt through newspapers that the JI had been assigned the task of contacting the PTI. He also denied Chaudhry Nisar’s claim that Imran Khan had proposed any names for caretaker prime minister. – dawn