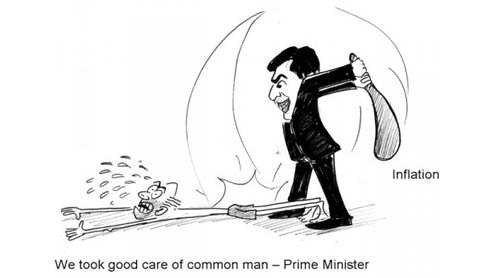 ISLAMABAD: A Budget Strategy Paper finalised for the federal budget for fiscal year 2013-14 projects total outlay of the budget at Rs 3.514 trillion, with fiscal deficit for the next fiscal year estimated at Rs1.620 trillion.

The total federal revenues are projected at Rs 2.833 trillion and total expenditures Rs 3.514 trillion for the upcoming fiscal year, according to the paper presented before the cabinet.The Real Gross Domestic Product (Real-GDP) growth target has been set at 4.5% for 2013-14 against the actual GDP growth target of 4.3% and downwards revised target of 4% for the ongoing fiscal year 2012-13.The consolidated fiscal deficit of the federal and provincial governments is estimated at Rs 1.550 trillion for 2013-14, as all four provinces are to create a budget surplus to the tune of 70 billion as saving from total federal transfers.

Transfers to the provinces under the 7th National Finance Commission Award has been projected at Rs 1.628 trillion in the next fiscal year as against the Rs 1.459 trillion actual transfers target and Rs 1.340 trillion downwards revised target of transfers during the ongoing fiscal year.The federal government has projected that interest payments on already obtained loans will cross trillion mark and are estimated at Rs 1.149 trillion for the next fiscal year as compared with Rs 926 billion actual and Rs 1.082 trillion upwards revised target for the ongoing fiscal.

Allocation for providing subsidies has been proposed on higher side at Rs 364 billion in 2013-14 as compared with actual allocation of Rs 237 billion and upward revised allocation of Rs 345 billion for the ongoing fiscal year.The macro-economic framework presented before the federal cabinet aims at containing CPI based inflation at 9%, increasing national savings to 13% against 12% of the last fiscal year and bringing public debt from 60.4% of the GDP to 57.5%. – DailyTimes