All politicians, no leader: Baba 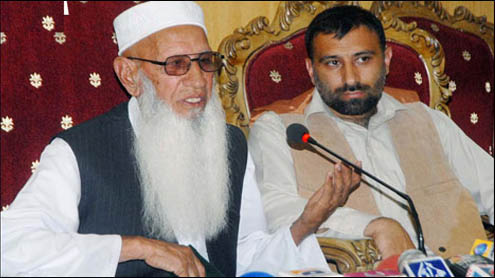 All politicians, no leader: Baba

MANSEHRA: The chairman of Tehrik-i-Sooba Hazara, Baba Haider Zaman, has said that there is no leader in the country to steer it out of the prevailing crises.

“All those, who claim to be leaders, are in fact politicians. They sell their conscience for the sake of money and power,” he alleged while addressing a public rally here on Sunday.He said that the rally was organised against the political opportunists, who switched loyalties recently to harm the interests of Hazara people.Mr Zaman said that both Pakistan People’s Party and Pakistan Tehrik-i-Insaf approached him to form electoral alliance with Tehrik-i-Sooab Hazara (TSH) in the upcoming general elections.

“The PPP and PTI have approached me for the electoral alliance but I would not go for any decision until the people of Hazara give me a green signal to do so,” he added.He said that a political mafia led by Sardar Mohammad Yousuf was planted by the rulers to dent the movement for creation of Hazara province. The opportunists were given berths in the federal cabinet but they failed to dent the movement so they sided with Mian Mohammad Nawaz Sharif.

“The mafia first penetrated into TSH and then created a so-called movement (Sooba Hazara Tehrik) to deceive the people. Now they have joined PML-N but soon they would leave Mr Sharif for another fraud,” said Mr Zaman.He said that he was not saleable and would continue his struggle until Hazara was given the status of a separate province.“Mr Sharif had offered me the office of chief minister of Khyber Pakhtunkhwa and a briefcase full of notes to leave the field open for him during election for a National Assembly seat in Havelian (Abbottabad) but I refused his offer as my conscience didn’t allow me to do so,” said Mr Zaman.

He said that Mr Sharif won a seat of National Assembly twice from Hazara but did nothing for the welfare of the people of the area. He said that Mr Sharif supported Awami National Party in renaming NWFP as Khyber Pakhtunkhwa just to become prime minister for the third time.Mr Zaman said that TSH would take part in the upcoming general elections from Hazara, Karachi, Lahore and Balochistan. “We would field our candidates from almost all seats in Hazara, one seat each in Karachi, Lahore and Balochistan to show our presence in the politicos,” he said.

The TSH chief warned the rulers to end discrimination against 10 million people of Hazara by giving the status of a separate province to the region.“Senate has passed the 24th amendment for giving Bahawalpur Janobi Punjab the status of a province but people of Hazara are deprived of their right despite rendering sacrifices for their demand. Such attitude of rulers is creating a sense of deprivation among the people of Hazara,” said Mr Zaman. – Dawn