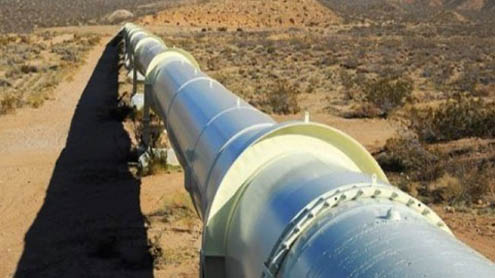 ISLAMABAD: Despite stiff opposition from the US, Pakistan and Iran are set to realise their cherished dream by the groundbreaking of the IP gas pipeline today (Monday).

Since the signing of the project, the groundbreaking at Gabd zero point on the Pak-Iran border will be an occasion where the top men of the two neighbouring states – President Zardari and President Ahmadinejad – will make history by preserving their respective countries national interest.President Asif Ali Zardari will land in Tehran today (Monday) along with a heavy Pakistani delegation, including the governors, the chief ministers, politicians, diplomats, journalists and government officials, and proceed to the Pak-Iran border in the company of his Iranian counterpart. Zardari and Mahmoud Ahmadinejad have reportedly invited the top men of Central Asian states, Gulf Cooperation Council, Turkey, Iraq, China and Afghanistan. Only Afghanistan has so far declined to participate in the memorable event.

An official said: “Both sides have so far withstood tremendous pressure from the US, but did not backpedal on their stance. The two sides finally agreed to sign what many duly believe is a monumental agreement. Both the Muslim countries have duly abided by the greatest responsibility on their shoulders to shrug off the unwarranted pressure.”Inviting the chief ministers and governors of the four provinces of Pakistan is to create consensus on this important project while the two countries achieve a milestone in the face of pressure from the United States; now coupled with the recent threats of sanctions. A large number of national politicians, particularly coalition partners, are expected to attend the ceremony.

When contacted, Senator Pervaiz Rashid first denied receiving any invitation to the Punjab CM from the PPP government. However, later he affirmed the PML-N stands by, saying, “We (PML-N) believe in regional cooperation and Pakistan should get energy from where it can to overcome the country’s energy crisis.”According to the high-ups in the Petroleum Ministry, all modalities have been finalised properly. Both the sides left no stone unturned to make this great event a success show. “We are short of words. Have no idea how to praise the great men who have paid off the debt that they owed to this country in such a big way that can’t be expressed in words…..This great gas would remove shadows of darkness,” said an official in the Petroleum Ministry.

The IP gas pipeline project was initially proposed in 1955, but the contact between both countries over the matter was halted in 1993 due to US pressures. As the US sanctions have put problematic hurdles in the way of making payments to Iranian firms, the two sides have drawn up a plan to finance the gasline on Pakistan’s side without Islamabad transferring funds to Tehran.Though at present Pakistan is scrambling to secure funds for the pipeline project amid the US opposition in the wake of sanctions imposed on Iran over its nuclear programme, the work on the Iranian side is completed, while the laying of 781km Pakistani section will commence now.Under the Engineering, Procurement and Commissioning (EPC) agreement signed between Pakistan’s Inter State Gas System (ISGS) and Iranian Tadbir Energy, the laying of 781-km-long IP gas pipeline falling into Pakistan’s side will be completed within the next 15 months.

The Pakistan portion of the pipeline will be constructed at a cost of $1.5 billion. Iran will provide $500 million loan to partially finance the construction, while Pakistan will pay the remaining cost. The state-owned SSGCL and SNGPL would initiate mechanical works while the FWO, a subsidiary of the armed forces, would carry out civil work of the project by laying the pipeline from Gabd to Nawabshah in Pakistan.

Pakistan and Iran have already reached an exclusive understanding to pay Iranian dues of $500 million through the cost of gas after the commissioning of Iran-Pakistan Gas Pipeline Project.The IP gasline project that will be completed by December 2014 will first bring 750 million cubic feet gas per day through 781-km-long pipeline with a diameter of 42 inches. Later, the gas flow will increase to one billion cubic feet per day. The cost of Iranian gas would be $13/mmbtu. This agreement –bringing 750/mmbtu gas to the country – would be functional for 20 years and there would be a 5-year extension. The Iranian gas will be consumed by the country’s power plants to generate around 4,000 megawatts of electricity. – Nation

Are you and your partner TOO CLOSE to have great sex?