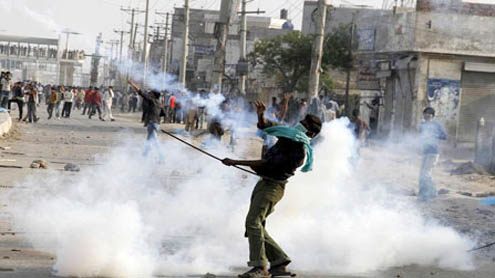 LAHORE: The issue of setting ablaze of a Christian colony in the provincial capital heated the political and social environment against the sitting Punjab government.

Political parties, civil society organisations as well as representatives from the Muslim community expressed solidarity with the victims of the Saturday attack on Saint Joseph Colony in Badami Bagh. Minorities came out on the roads and protested against the attack. Residents of the Saint Joseph Colony also held a protest demonstration on the remains of their looted and burnt homes, demanding justice and compensation from the judiciary and government.

The Christian community started gathering members in large numbers in front of the Lahore Press Club on Sunday morning and protested against the attack on the Saint Joseph Colony. The protesters were carrying copies of the Bible, and the Cross along with banners and placards. Christian youths chanted slogans against the provincial authorities and the ruling Pakistan Muslim League-Nawaz (PML-N). They accused some parliamentarians of the PML-N of being behind the incident.

MPAs Pervez Rafique, Najmi Saleem, Shehzad Elahi and other leaders of the minorities led the protesters, including hundreds of females, outside the Lahore Press Club. They held a large rally at the Charing Cross in front of the Punjab Assembly where some Christian youths damaged the traffic police kiosk and a couple of traffic signals before being stopped by their elders.

While talking to media, MPA Pervez Rafique said that at least 178 houses, 29 motorcycles, 12 rickshaws, 400 copies of the Bible and one church had been burnt during the attack on Joseph Colony. He said the attackers have also looted dowries worth millions of rupees of Christian girls from the houses. The minority leaders asked the government to provide security and equal rights to their community and said they were equal citizens of Pakistan and have given sacrifices for its creation. – DailyTimes