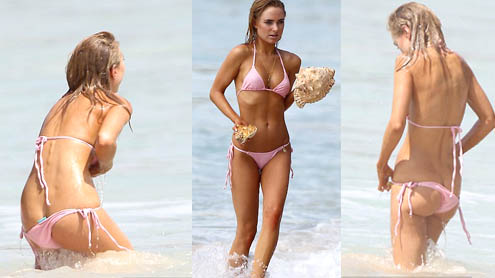 Some girls on holiday to enjoy pampering spa treatments, sip exotic named cocktails and eye up the opposite sex.

But that might be too much like a busman’s holiday for Made In Chelsea’s Kimberley Garner who has spent her sunshine break in Barbados posing for photographers.The blonde reality star has been seen prancing around on the island’s powdery white sand in a selection of different swimsuits.It is not clear who exactly is taking the photographs of the blonde 22-year old, but she revealed to her Twitter followers that she had been posing alongside somewhat of a celebrity.

‘Just had a photoshoot with a beautiful horse..He was used in Rihanna’s video,probably should have watched it…He was wild!!!! #diamonds’ [sic], she tweeted.On Wednesday she was again using items from the natural world to give her sexy photos an edge.Kimberley was seen emerging from the sea holding two shells, and later she threw them back in to the ocean.The light pink bikini was one of the tiniest yet, and she soon discovered that wearing a skimpy swimsuit when larking around in the sea can lead to problems.

More than once the former reality TV star had to adjust her bikini bottoms, and at one point they threatened to come off completely.At one point a cameraman took the lithe starlet to one side to show her the pictures he had taken of her.Kimberley, who has previously said she wants to move in to fashion designing, took a keen interest, and leant in closely to see the images.On Tuesday she posted a picture to her Twitter account of some cheeseburgers, but it was hard to believe that she had indulged in such junk food when she cut such a trim figure.Ever since she made a name for herself on Made In Chelsea, Kimberley hasn’t exactly been a shrinking violet.

Kimberley happily threw her hair back while wearing a bondage style black strappy swimsuit with a silver crotch.Stretching back she posed while pouting for the cameras as she worked her different sexy looks all afternoon.In fact, Kimberley carried out a number of antics on the sand ready to garner attention as she frolicked with her best pal.The reality star was seen in a number of different bikinis, posing in a mirror and checking out her photographs.[contentblock id=2 img=adsense.png]

And she caused even more of a stir as she fell to the floor and giggled while cuddling her friend and showing off her pert derierre.The former Made In Chelsea star spent her weekend relaxing on the beach in a tiny lilac string bikini, in between hitting the waves on her surfboard.And while she has been romantically linked to her former MIC co-star Richard Dinan and X Factor winner James Arthur in recent months, Kimberley looked more than happy to be spending her break in the company of a girlfriend.The blonde star, who has become something of a fixture on the London party scene, didn’t seem worried about who spotted her strutting around in her two-piece at the Sandy Lane Resort.

Obviously completely body-confident, Kimberley had no qualms about slipping into the smallest possible bikini, showing off her tiny frame in the skimpy number.She wore her blonde hair loose and tousled, adding a sun hat as she wandered around, and carrying a large cream holdall on one arm.After spending some time laying flat out on some bright red sun-loungers, the former reality star clearly felt the need to do something active so grabbed a surf board.

Admitting that she was only a beginner but was trying to get the hang of the sport, she wrote on Twitter; ‘Learning to surf @SandyLaneResort … Not as easy as it looks! Haha x’.Giggling with her friend, Kimberley didn’t seem to make it very far into the water, hanging around in the surf clutching her board.After her dip in the sea, she made her way over to the shower where she washed herself in front of the other beach-goers, obviously not worried about being spotted.

The model seemed to be having the time of her life at the upmarket Barbados resort, tweeting a picture of a huge burger and chips.But the slimline star has admitted that she doesn’t even go to the gym to maintain her unbelievably toned figure.’I’m really bad with fitness… I am not even a member of a gym… But if I want to exercise I do Pilates. It’s really gentle,’ she said recently.’But I love to dance, I grew up at Pineapple Dance school so I often go back just for fun.’ – DailyMail