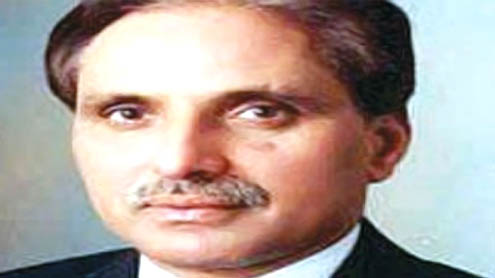 PESHAWAR: The government and the opposition in Khyber Pakhtunkhwa announced on Friday the name of Justice (r) Tariq Pervez Khan, a former judge of the Supreme Court, as the caretaker chief minister.

The announcement was made at a press conference jointly addressed by Chief Minister Ameer Haider Khan Hoti and Leader of the Opposition in provincial assembly, Akram Khan Durrani.Hoti said there were a few names under consideration for the post of caretaker chief minister but the name of Justice Tariq Pervez faced no objections from both the opposition and the government, adding the interim chief minister was named on merit.

Talking about the naming of the interim provincial chief, Akram Durrani said he had always preferred national interest over his personal interests.Hoti said he would advise the governor to dissolve the provincial assembly at the time of dissolution of the National Assembly. He further added that Justice (r) Tariq Pervez was an impartial and honest man.Hoti said the announcement regarding the appointment had been made in the federal capital to give the federation and the provinces the message that caretaker governments should be set up by rising above political benefits.

To a question, he said deferment of the general elections would be fatal for country.To a question on terrorism, Akram Durrani said the ANP and JUI-F had proposed in the declaration of All-Parties Conference that the issue of terrorism must be resolved through talks.He said President Asif Ali Zardari should prepare a roadmap for talks with the Taliban in collaboration with the caretaker government.

By announcing the name of a caretaker chief minister, Khyber Pakhtunkhwa has taken lead over the three other provinces as well as the Centre.A former chief justice of Peshawar High Court Justice Tariq Pervez was a judge of repute who earned a lot of respect from the legal fraternity and civil society when he declined to take oath under the Provisional Constitution Order after General Pervez Musharraf declared emergency on Nov 3, 2007.He was chief justice of the high court at that time. Tariq Pervez Khan was finally restored along with several other judges of superior courts. – Nation