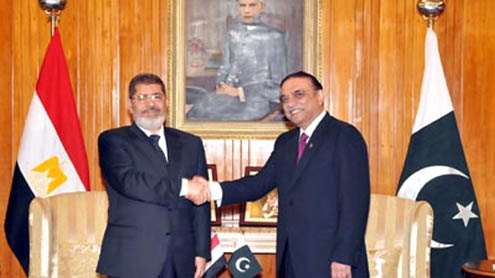 ISLAMABAD: Pakistan and Egypt on Monday expressed satisfaction at the increase in bilateral trade and agreed to intensify efforts to further expand and diversify their commercial and trade relations.

The leadership of both the countries said that both countries enjoy close and traditional friendly relations that date back to the creation of Pakistan.This historical relationship is rooted in common faith and cultural affinities between the peoples of the two Islamic countries.A joint statement issued at the end of Egyptian President Mohamed Morsi and his high-level delegation day-long visit to Pakistan said that both leaders expressed their ardent desire to open a new and glorious chapter of bilateral relations between their two countries. In this respect, they agreed that high level political interaction and exchanges are vital to take their relations to a higher trajectory.

President Asif Ali Zardari and his Egyptian President Mohamad Morsi agreed to hold a bilateral summit on biennial basis alternately in Pakistan and Egypt.Both leaders were of the view that the inaugural session of Pak-Egypt Joint Business Council must be held at the earliest to discuss ways and means of boosting bilateral trade.The two leaders agreed to hold 4th Session of the Joint Ministerial Commission (JMC) in Islamabad later this year.The leaders shared the view that there are numerous opportunities for enhancing bilateral investments and undertaking joint ventures between the two countries in various sectors of their respective economies.

The joint statement said that both leaders called for an increase in people to people contacts which they believed was extremely important in cementing the bonds of friendship between the two countries.The two sides expressed their deep concern over the deteriorating humanitarian and security situation and the continuing violence and bloodshed in Syria, and called upon all parties to stop violence and engage in an all inclusive national dialogue in order to resolve the conflict through peaceful political means.

The two leaders reiterated their well-known support for the Palestinian cause in line with their backing of the United Nations Security Council Resolutions 242 (1967) and 338 (1973) calling for a negotiated solution resulting in a sovereign, independent, viable, contiguous and united State of Palestine living within secure and recognized borders with East Jerusalem as its capital.The two leaders welcomed the overwhelming vote at the United Nations General Assembly to upgrade Palestine to a Non-Member Observer State status in the United Nations.Both leaders agreed that the two countries should work closely together to address the common challenges faced by the Ummah and to promote peace and stability in the region. – Brecorder