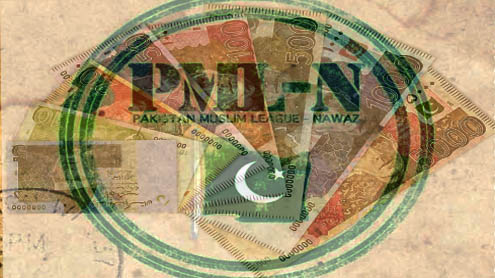 ISLAMABAD: The Pakistan Muslim League-Nawaz (PML-N) is the richest political party of the country in terms of its assets, whereas the former ruling party Pakistan People’s Party Parliamentarians (PPPP) owned only a few hundred thousands worth of assets.

According to details of assets of political parties registered with the Election Commission of Pakistan (ECP) for the financial year that closed on June 30, 2012, the PML-Q followed PML-N by coming second in terms of assets. Pakistan Tehreek-e-Insaf (PTI) lagged much behind the PML-N and PML-Q. However, it was much ahead of PPPP in this regard.The PML-N declared assets of Rs 77 million during the year under review. In the statement of assets, the party announced that donations from its workers and parliamentarians were the main source of its income.

The PPPP possessed only Rs 435,397 worth of assets in the financial year 2011-12. It did not declare the source of its income.The PML-Q, led by Chaudhry Shujaat Hussain, had total assets worth Rs 51 million at the close of financial year 2011-12 and the party generated income through donations from its members. It announced that no funds were received from any source prohibited under Political Parties Orders 2002 during the year under consideration.

Imran Khan-led Pakistan Tehreek-e-Insaf’s total assets stood at Rs 9.460 million during the financial year 2011-12. The contributions to the party mainly came from chairman, members and supporters as well as from the general donations. Jamiat Ulma-e-Islam-Fazal (JUI-F) owned Rs 27 million worth of assets in the year under review and the party mentioned donations as the main source of its income during the year.The Awami National Party declared assets of Rs 27 million and announced donations from party members and bank profits as the source of income. Meanwhile, the Muttahida Qaumi Movement showed Rs 19 million worth of assets by the end of financial year 2011-12 and declared the contribution from party workers and sale of fixed assets as the source of income for the party.

Religious political party Jamaat-e-Islami’s total assets were worth Rs 1.850 million in the said period and the party said donations were the main source of its income. Sheikh Rasheed Ahmed-led Awami Muslim League’s assets stood at only Rs 70,000 during the year under review. The assets include Rs 15,000 worth of furniture, Rs 30,000 worth of computer, Rs 15,000 office equipment and Rs 10,000 worth of fax. The fee and donation have been declared as the sources of income of the party.

The Pakhtunkhwa Milli Awami Party (PKMAP) owned total assets of Rs 1.4 million at the end of June 30, 3012. The party said that contributions from central councillors of the party and provincial jirgas of the party were tis sources of income. Pakistan Awami Tehreek of Tahirul Qadri owned Rs 270,015 worth of assets at the close of financial year on June 30, 2012. meanwhile, the Pakistan Muslim League-Functional (PML-F) owned Rs 548,902 worth of assets and mentioned donations and membership fee as the main source of income. – DailyTimes