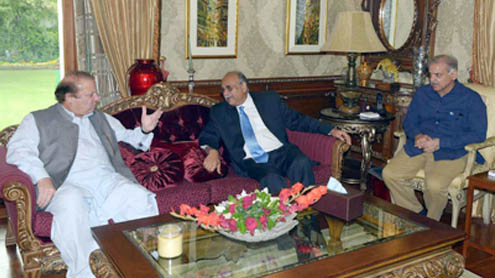 LAHORE: Caretaker Chief Minister of Punjab and veteran journalist, Najam Sethi has promised to shake-up bureaucracy in the province within a week and form a cabinet with no more than six ministers.

He said holding transparent, free and fair elections was the mandate of the caretaker setup and it remained his top priority.“I take this national responsibility as a sacred trust and it would be discharged honestly,” said Sethi.Using his contacts with mainstream politicians, he set out on Thursday to meet them. He visited Jamaat-e-Islami headquarters at Mansoora, residence of Chaudharies at Zahoor Elahi Road and Sharif brothers at Model Town.

In the meetings with these politicians, he discussed the upcoming elections while taking suggestions and hearing out their reservations.After the meeting with JI chief, Syed Munawwar Hasan, Sethi talked to media and said that he would appoint impartial officers within a week to hold free, fair and transparent general elections as per schedule.The JI chief welcomed the journalist’s appointment as Caretaker Chief Minister and assured his full cooperation. He said Najam Sethi is a competent person and it is hoped that he will take effective steps for ensuring free and fair elections.

Hasan said that the appointment of Sethi as caretaker chief minister is very important as people have confidence in him.The caretaker Chief Minister called on PML-Q President Senator Chaudhry Shujat Hussain, Chaudhry Parvez Elahi and Moonis Elahi at their residence and exchanged views regarding the election environment in Punjab. The Chaudhry brothers assured him of their full cooperation and demanded changing the entire administration of Punjab.

According to sources, the PML-Q leaders alleged that Shahbaz Sharif had appointed his loyalists in the administration and had tasked them with manipulating the upcoming elections.Sethi said he had obtained permission from the Election Commission of Pakistan and would be reshuffling the entire provincial administration.In the meeting with Nawaz and Shahbaz Sharif, political situation in the province and holding of free and fair elections were discussed.

Sethi said positive proposals had been put forward in the meetings with the political leaders and all of them have called for the posting of honest, hardworking and neutral administration. He said the constitution and law will be upheld in the holding of peaceful and transparent elections.The caretaker Chief Minister is scheduled to meet Pakistan Tehreek-e-Insaf chairman, Imran Khan today (Friday).He said the Inspector General of Punjab Police is being appointed in accordance with the directives of the Supreme Court.

Sethi said he was opposed to the VIP culture and would opt for minimum security for himself. He also promised to move around the province in a way that would cause least inconvenience to the general public on the roads.The caretaker Chief Minister also visited the shrine of Hazrat Ali Hajveri, laid a floral wreath and offered special prayer for progress, prosperity and solidarity of the country.

Authorities of Auqaf Department, DCO Lahore, Yousaf Salah-ud-Din and other personalities were present on the occasion.Later, the Caretaker Chief Minister visited the mausoleum of the Poet of the East, Allama Muhammad Iqbal, laid a floral wreath and offered Fateha, besides offering special prayer for peace, tranquillity and strength of the country. During his visit, the caretaker Chief Minister also recorded his impressions in the visitor’s book. – DailyTimes