Musharraf on the run after bail cancellation 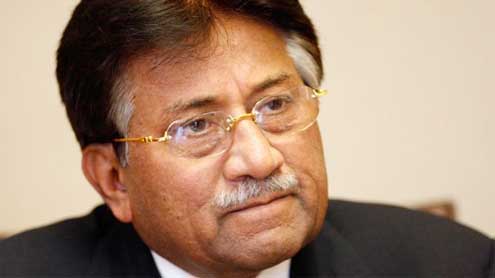 Musharraf on the run after bail cancellation

ISLAMABAD: General (retd) Pervez Musharraf on Thursday escaped from the premises of the Islamabad High Court after the cancellation of his bail application by Justice Shaukat Aziz Siddiqui in the judges detention case.

Immediately after the bail cancellation, police tried to reach the former military ruler but he was escorted by his personal security, fleeing in his bullet-proof black four-wheeler.Musharraf had arrived at the IHC for the hearing and a large contingent of police and Rangers personnel was stationed at the court’s premises for security purposes.

Earlier last week, the former military ruler was granted a six-day interim bail after he surrendered before the court in the judges’ detention case in which he had been declared a proclaimed offender.The case is based on an FIR against the retired general registered in August 11, 2009 on the complaint of Chaudhry Mohammad Aslam Ghumman advocate.He had asked the police to initiate legal proceedings against Musharraf for detaining over 60 judges, including Chief Justice Iftikhar Muhammad Chaudhry, after proclamation of a state of emergency in the country on November 3, 2007. – Dawn

WAPDA gets Rs 10b to get rid of load shedding, another Rs 10b on the way