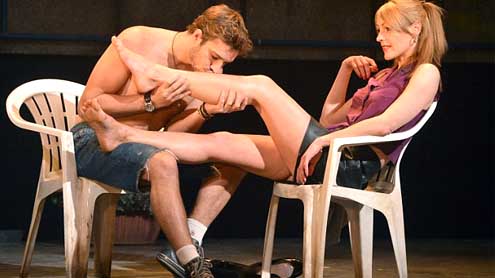 But that’s all about to change for Suranne Jones as she takes to the stage in urban love story Beautiful Thing.The actress ditched the suits and slipped into a short leather skirt as she got amorous in front of famous faces during the play’s press night at the Arts Theatre on Wednesday.Suranne plays Sandra in the play as it returns to the West End to celebrate it’s twentieth anniversary. One shot shows the 34-year-old sitting on a chair in the sexy skirt  while a topless Oliver Farnworth, who plays Tony, kisses her bare leg.

Another shows her in the bedroom in just her dressing gown having what looks like a row with Jake Davies who plays her son Jamie.But while she’s getting on very well with Tony, things don’t look so peachy between her and a female co-star who she is seen putting in a headlock. The play also stars Waterloo Road Zarah Abrahams and Holloaks’ Oliver Farnworth.

Directed by Nikolai Foster, the play first premiered back in 1993 and instantly sold out before moving on to other theatres. Over the years many actors, who have gone on to have incredible successful careers, starred in the play including Jonny Lee Miller, Hugh Bonneville, Andrew Garfield, and Rhys Ifans.This isn’t Suranne’s first foray into theatre, she has also starred in A Few Good Men, Terms Of Endearment, Blithe Spirit and Top Girls.Kimberley Wyatt, Claire Sweeney and Melanie Sykes were amongst those to attend the press night. – DailyMail