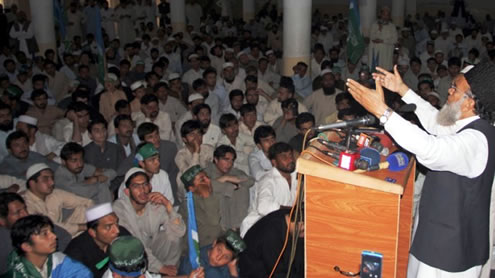 The Awami National Party has decided to approach the Election Commission of Pakistan to protest over the Jamaat-e-Islami’s use of a mosque to campaign for the general elections.

The move follows JI chief Syed Munawar Hasan’s address at a political gathering in a mosque on University Road in Peshawar Wednesday afternoon. ANP’s provincial General Secretary Arbab Mohamamd Tahir told The Express Tribune that the party’s Khyber-Pakhtunkhwa chapter President Senator Afrasiab Khattak will write a letter in a couple of days to the ECP to protest against the gathering in the mosque. Tahir explained that JI had arranged a function at Spin Jumaat (White Mosque), which was addressed by Hasan. He added that if one political party started using mosques for electioneering, then other parties would also follow suit. He said the letter will also be forwarded to Chief Justice Iftikhar Muhammad Chaudhry. Tahir stated that the use of mosques for election campaigning amounted to violation of ECP’s code of conduct and called on the commission to take notice of such violations on its own, irrespective of whether a party approaches it or not.

The political atmosphere, he said, was already tense due to terrorist and sectarian attacks and candidates were finding it difficult to approach the public for votes due to threats they faced from militants. As such, the use of religious places for campaigning purposes could create further problems.

“People go to mosques to offer their prayers and when some people start making political statements in mosques, it will lead to a further deterioration of the situation and will add to the unrest.” However, the provincial spokesperson of JI, Israrullah Advocate, denied his party was using mosques to campaign for the May 11 polls.

He said his party was conducting its meetings in open spaces and at hujras and did not use religious places. Hitting out at the ANP, Israrullah claimed that it was facing many problems because of the ‘wrong policies’ it pursued over the past five years of its governance in K-P. Defending Wednesday’s gathering, the spokesperson claimed it was not slated to be held in the mosque and they had planned the programme outdoor at the public square. However, they were approached by the police to move inside the mosque due to heavy rain at the time.

“First they [police] asked us to shift the programme to the University campus however, they later told us to utilise the nearby mosque,” Israrullah added. – Tribune