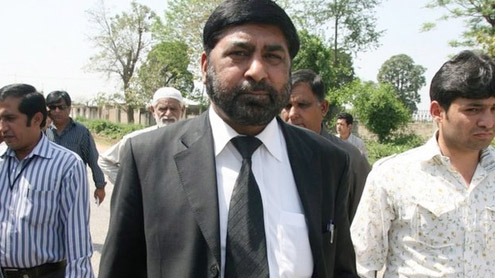 ISLAMABAD: A Federal Investigation Agency (FIA) prosecutor investigating the assassination of former prime minister Benazir Bhutto and the 2008 Mumbai attacks was gunned down in Islamabad on Friday.

Gunmen on a motorcycle fired multiple bullets on Chuadhry Zulfiqar Ali in Karachi Company area of the Sector G-9 while he was heading to an anti-terrorism court in Rawalpindi for hearing of Benazir Bhutto murder case.The killing of the prosecutor comes days after a court sent former president and chief of army staff General (r) Pervez Musharraf on a 14-day judicial remand on charges of conspiring to kill Benazir Bhutto. Zulfiqar was reportedly set to oppose bail application by former president in this case on Friday.

Co-prosecutor Azhar Chaudhry told Media that both he and Zulfiqar had been receiving threatening calls for some time. The unidentified callers warned them to stop pursuing Benazir murder case or face consequences, he said, and added that Inspector Ilyas and Civil Lines Police Station SHO Ijaz Shah, both witnesses in the Benzair assassination case, were also warned to refrain from presenting themselves as witnesses.Azhar said intelligence agencies had traced the calls received by them as having been made from different areas of neighbouring Afghanistan. He said they both had repeatedly requested the government for extra security but were provided only one FC guard each.

Ch Nisar, son of the slain prosecutor, complained that the government had failed to take adequate steps to protect the life of his father despite clear threats.Zulfiqar was appointed as special prosecutor in the Benazir assassination case when the investigation was handed over to FIA some four years ago. He had presented six challans in the court and was to present seventh challan. He also represented Pakistan in Mumbai attack case and was member of the judicial commission that visited India last year to investigate the case.

He was also acting as FIA’s special prosecutor in Hajj corruption scandal.Several bar associations have announced to observe complete strike in protest against the killing of Chaudhry Zulfiqar.President Asif Ali Zardari has ordered a thorough investigation into the incident to expose the real culprits involved in the murder of Chaudhry Zulfiqar Ali. – Daily Times