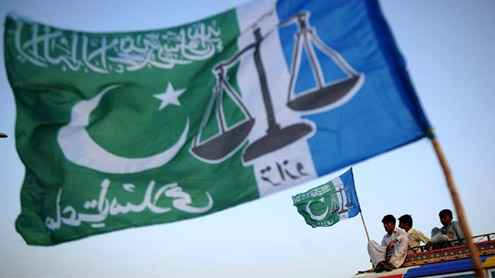 PESHAWAR: Three young Jamaat-i-Islami supporters, with stubble, are led into a room at its provincial headquarters, Al-Markaz-i-Islami.

The bearded Al-Markaz-i-Islami staffer who leads them into the Shauba-i-Nashro Ishaat (information section) introduces them to the party’s provincial secretary information.“They are here to enquire about the party flags and badges,” said the staffer, stepping aside as the youth in Shalwar-Qameez move to embrace JI’s Israrullah advocate.“I will guide you to the relevant person in another room who would provide you all the information you may need,” said Mr Israrullah, explaining the party flags were provided to its district chapters as and when they submitted requests.

“We receive party flags from our Lahore office and our district organisations make payment to get flags at a flat rate,” said Mr Israrullah, adding “the party funds are limited therefore candidates have to raise donations from their supporters for printing posters and stickers.”Jamaat-i-Islami, perhaps, is the only party that is closely monitoring the election campaigns of all of its candidates in Khyber Pakhtunkhwa and elsewhere. The party has fielded 43 candidates on 47 National Assembly constituencies from Khyber Pakhtunkhwa and Federally Administered Tribal Areas in addition to 87 candidates contesting for the Khyber Pakhtunkhwa Assembly.

“The core teams of all the candidates send daily reports to the party’s Intikhab Cell (election cell), sharing details of their day-to-day activities, corner meetings, and rallies,” said Prof Mohammad Ibrahim Khan, the party’s provincial chief, a candidate for the National Assembly constituency from Bannu NA-26.Leaders of Awami National Party, Pakistan People’s Party, and Jamiat Ulema-i-Islam-Fazl, when contacted on Sunday, explained in detail the respective strategies to monitor the election.However, none of them had put in place centralised mechanism on JI’s pattern to track their candidates’ day-to-day activities. Similarly, none of them had organised attention to the finer details of the candidates’ electioneering, providing publicity material through the district based entities.

Afrasiab Khattak, ANP’s provincial president, said that a team of senior leaders who were not contesting met frequently to assess the party candidates’ position in constituencies where ANP was strong and places where ‘we are weak.’“I stay put in Peshawar and remain in touch with our focal persons appointed at the constituency level,” said Mr Khattak.According to Abdul Jalil Jan, JUI-F’s provincial secretary information, the party’s district organisations were monitoring electioneering in their respective districts, addressing issues at the local level. However, the party, he added, did not have a centralised mechanism at the provincial level to track the candidates’ campaign trails.

The PPP, on the other hand, has worn an authoritative look these days. Its provincial president, according to information collected from sources in the party, is monitoring the situation on his own.“Whenever any candidate requires, the provincial president and other office bearers dash to the area to do the needful,” said Nighat Orakzai, a spokesperson for PPP’s provincial chief Anwer Saifullah, adding that “he addressed election events at Kohat, Karak, Dera Ismail Khan, and Bannu during the last two days.”Nonetheless, electioneering appears to be the sole domain of candidates in the case of ANP, PPP, and JUI-F.

PPP leaders justify their inability to hold public or even corner meetings to terrorist threats. “We have left the campaign to the candidates,” said Ayub Shah, PPP’s leader from Peshawar.He said PPP was an old and established party with a large following. Afrasiab Khattak held the same opinion about his party. “We saw it (militant attacks) coming and planned our strategy far ago,” said Mr. Khattak. The party, according to him, has a large base of village organisations at the grassroots level in the rural areas and wards in the urban centres of the province. These grassroots level entities, he added, fed their reports on regular basis to the provincial organisation, helping it to plan ahead.

Jamaat-i-Islami has gone a step further, materialising its election strategy.It had declared its union council level party offices as the election offices, using them to monitor and organise JI candidates’ electioneering at their end. “These offices (JI’s chapters at the UC level) are not like the ordinary election offices,” said JI’s Israrullah, adding “they do serious work.”Prof Ibrahim, the party’s provincial chief, said the party candidates made use of poll surveys to their advantage. “Gallop’s is one such survey that is being used to plan and execute election campaign,” said Prof. Ibrahim.

One of the jobs of JI’s Intikhab Cell, said Mr. Ibrahim, was to issue instructions to candidate(s) and solicit information from the party’s district chapters to do in-house evaluations and constituency-wise assessments.The JI’s candidates, according to him, have raised donations for the party fund. “JI’s election campaign is being run from the party fund raised through donations by the candidates,” said Prof Ibrahim. – Dawn