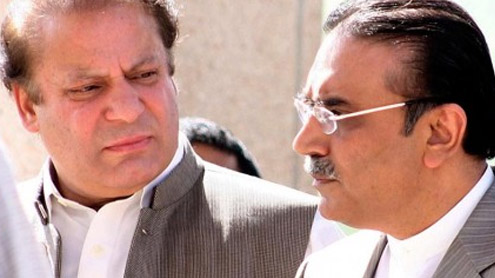 This acceptance would be marking the already auspicious event, with another memorable occasion of first informal, meeting between two, after the elections.PML-N sources have indicated that despite being informal, the talks would still entail deliberations over important National matters, which would definitely include the most impending issue of transfer of power.

Nawaz Sharif would also be raising the issue of high-level appointments, during which he would be stressing over resignation of NAB (National Accountability Bureau’s) head, Admiral (Retd) Fasih Bukhari, over Fasih’s indictment in subjudice case of Contempt of Court; since Nawaz would like to make a new appointment.Currently the NAB head Fasih Bukhari is also pursuing references against Sharif Brothers, and any new appointment would simply shelve these references into cold storage.

Meanwhile even former CM Punjab, Shahbaz Sharif has also expressed his strong reservations on some appointments, which were ‘clarified ‘by Presidential spokesman Farhatullah Babar as being made by caretaker government, having no role by President Zardari; “which should compel Shahbaz Sharif to desist from any blame-game”.Political analysts , observers are closely monitoring the meeting , which would be an indicator of future relationship between two luminaries; whether it helps thaw the current ‘freeze’ or widens the gulf of differences. – OnlineNews