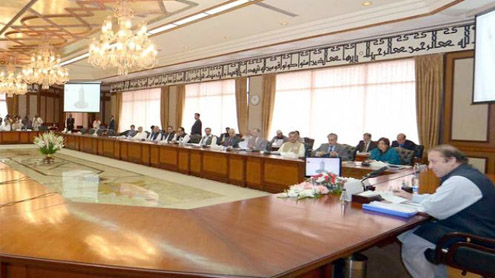 ISLAMABAD: Prime Minister Muhammad Nawaz Sharif on Monday directed the Federal Cabinet to chalk out its priorities and prepare an action plan within 15 days to overcome challenges faced by the country.

The Prime Minister said for ceratin departments such a timeframe was long enough as the issues relating to them required prompt action within 24 hours. By giving them a fortnight will enable them to have enough input for the task, he added. “To achieve targets well within the set time frame is a greater task. I will support you and lend you every cooperation but you will have to set aside your personal interests and work with more dedication, vigour and commitment to produce better results,” he added. Addressing the maiden cabinet meeting, the Prime Minister stressed  that they would have to solemnly promise for sacrificing everything for the national cause.

“We have to prove with our action, the ability we are born with,” he added.He urged the cabinet members to understand the issues of their respective ministries to achieve the goals well in time.Any member failing to meet the objectives, in his opinion, will lose his status of responsibility furthermore, Nawaz remarked.“Pakistan should be our priority and our efforts be focused on to tackle the issues,” he said and added that the countrymen had reposed complete confidence in them by giving a heavy mandate.“We also require to gird up our loins and come upto the hopes and expectations of the people,” he maintained.

The Prime Minister said that they required to get rid of the inertia and the lethargic attitude by taking on the challenges seriously. Such a wishful and lethargic thinking should be discarded and a new spirit is required to be infused for the national cause by keeping personal interests aside, he added.Prime Minister Muhammad Nawaz Sharif said that it was a defining moment in the country’s history as it was facing a number of challenges on socio-economic fronts.

“We need to put the country’s economy back on track, eradicate poverty, eliminate intolerance, reduce load-shedding, inflation and above all isolation at the international level.”The Prime Minister urged all the cabinet colleagues to put an end to the culture of lethargy. He impressed upon them to set aside personal whims and wishes and concentrate to resolve various issues in the larger national interest.“At the moment we have to think of Pakistan and Pakistan alone. In the next five years, we can address all the issues but we should set clear cut targets and resolve neither to indulge in corrupt practices nor allow corruption by others, to prosper,” he said.

He attributed the current sorry state of affairs to corruption and vowed to eradicate it by all means.The Prime Minister said the democratic transition of power from an elected government to another was highly praise-worthy and added that the people of Pakistan deserved praise for dismissing all rumours regarding the delay in polls and participated in the electoral process with great zeal and fervour.He said timely holding of fair and free elections removed all doubts in the minds of certain individuals.

Prime Minister Nawaz said the people had given them an overwhelming mandate and it was God’s will that whoever comes into power should have the backing of majority of electorate.The governments with fractured mandate cannot solve any problems, he said and added  that such governments had to compromise on principles and ideologies and the current state of affairs had no room for making such compromises.“The people have seen our performance in the past and had taken a mature decision in electing us with a large mandate,” the Prime Minister said.

He said,”Naturally the people have high expectations pinned on us. So we have to deliver accordingly.”The Prime Minister said that he expected every minister and department to set goals and targets. There should be a plan of action and targets should be achieved within the shortest possible time.“Now is the time to give results in order to come up to expectations of people of Pakistan. I shall review your performance and I would not like to fail,” he said.He advised the Cabinet members to study party’s manifesto and see as to what are the commitments with  people.“We have to reduce all non-development expenditure by at least 30 per cent or even more,” he added.

The Prime Minister said all sectors were experiencing total disaster. What can a farmer produce with tube-wells devoid of power? he asked and added that power looms were shut down due to electricity shortage and the government could not be a spectator.He said the circular debt had reached an enormous level of Rs 503 billion. “Even if we retire this debt, there is no guarantee this will not re-appear unless we put in place a comprehensive plan to avert future problems.”

Prime Minister Nawaz Sharif said, “We have held a number of meetings from May 11 to June 5 to find a viable solution for ending load-shedding. We have to see whether we can set up new plants as thermal power is extremely expensive. We shall try to remove line losses and end pilferage. We shall punish all those responsible for this crisis and causing great discomfort to the people.”He said he was displeased to see institutions like Pakistan Steel Mill, PIA and others incurring huge losses. All possibilities would be explored to turn around public sector organizations, including privatization, public-private partnership and appointing competent Chief Executive Officers (CEOs).

He said the country was facing issues like extremism, militancy and sectarianism and all efforts would be made to rid the country of these ills.Nawaz Sharif said Pakistan was facing international isolation. International environment was no longer conducive for the country.He said the government had already taken due notice of drone attacks and registered its strong protest at an appropriate level.  The drone attacks were a violation of national sovereignty and would never be tolerated, he emphasised.

The Prime Minister said situation in Balochistan was going to be normal. “We could also form a government there but we decided to give a chance to leadership of the province,” he said.He expressed the hope that with active support of people and his team, the government would be able to bring prosperity and establish peace in the country. – APP