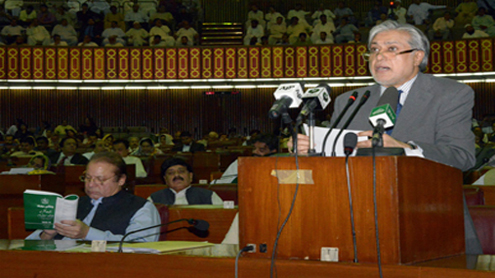 Federal Finance Minister Ishaq Dar while delivering budget speech at the National Assembly here also announced measures to increase tax collections and reduce non-development expenditures.He said for 2013-14, the gross revenue receipts of the federal government are estimated at Rs 3420 billion compared to the revised figures of Rs 2837 billion for 2012-13, showing an increase of about 21 percent.He said the share of the provinces out of this amount will be Rs 1502 billion compared to Rs 1221 billion last year, showing an increase of about 23 percent.

The current budget is estimated at Rs 2829 billion for the new fiscal year against a revised estimate of Rs 2720 billion for 2012- 13 showing an increase of 4 percent.He said keeping in view the development needs, investment requirements of the country and urgency of creating additional job opportunities, adequate development resources have been provided.”We have budgeted PSDP at Rs. 540 billion showing an increase of nearly 50 percent.”The provincial governments will make investment of about Rs. 615 billion taking the total public sector investment to Rs 1155 billion, which is a healthy 4.4% of GDP.

The Minister said the federal deficit is projected at Rs 1674 billion compared to the revised estimate of Rs 1962 billion for last year.”By requiring a small surplus of Rs 23 billion from the provinces, compared to a revised deficit of Rs. 41 billion last year, we have projected an overall fiscal deficit of Rs 1651 billion for 2013-14 compared to the revised estimate of Rs 2024 billion last year. This gives deficit to GDP ratio of 6.3 percent for 2013-14 compared to an alarmingly large deficit of 8.8 percent incurred last year. An adjustment of nearly 2.5 percent is not a mean achievement and we are confident that we will deliver it,” he added.

Announcing measures for arresting inflationary pressures, he said reduction in fiscal deficit will have salutary effect on inflation.The Finance Minister informed that regular price monitoring will be undertaken with a view to ensure adequate supplies of all commodities.We will be using public savings and cheap foreign borrowings to finance deficit and reduce the burden of debt servicing.”He said entire circular debt of Rs. 500 billion will be settled in 60 days to resolve the energy crisis.Federal Adjuster will be organized and strengthened to ensure expeditious recovery of arrears of electricity from the provincial government, he said adding the Prime Minister will soon announce a comprehensive plan to encourage investment in energy projects.

The Minister said Income Support Programme will be raised to Rs. 75 billion which is nearly double of the programme.Rs 1000 per month under the income programme will be increased by 20 percent to Rs 1200 per month, he said.He said the budget is part of a medium term framework spanning 2013-14 to 2015-16 and one of its key features is that GDP growth will gradually rise to 7 percent by FY 2015-16.According to the framework, inflation will be maintained in single digit throughout the medium term, investment to GDP ratio will rise to 20 percent at the end of medium term, fiscal deficit will be brought to 4 percent of GDP and Pakistan’s foreign exchange reserves will be increased to more than $ 20 billion at the end of this term, the minister explained.

The Minister revealed that 3G licenses for mobile phone sector will fetch $1200 million and the government will also strive to secure the payment of $800 million from the Etisalat that is due for more than five years.For promotion of housing sector, 3 marla housing schemes will be developed on government land for the homeless and to ensure access to credit for housing, government will allocate Rs. 3.5 billion to meet financing cost of people borrowing from banks for building homes, he added.

The Minister said allocations have been made for Neelum Jehlum Project, Diamir Bhasha dam, Tarbela fourth extension project, Thar coal gasification, Chashma nuclear power plants and projects of Nandipur and Chichuki Malian power stations.”We are according top most priority to connect the Gwadar port to the north by rapidly completing the various sections of Turbat- Basima-Ratodero and other smaller sections of M-8.””We have opened dialogue with the Chinese government for constructing a modern expressway linking Gwadar with Kashgar. This will be the modern equivalent of ancient Silk route.”

Ishaq Dar committed to revive Pakistan Railways and through an Act of Parliament convert it into a corporation managed by board comprising professionals from public transport, engineering and management.Feasibility studies will be completed for linking Pakistan through railway from Gwadar to Afghanistan and from Gwadar to China and Karachi Circular Railway project will be expedited, he said.

The minister said the enrollment in higher education will increase from 1.08 million students to 1.23 million students in 2013-14 and foreign scholarships will rise to 6249.For promotion of industry and regional trade, Export Promotion Zones will be developed with incentive packages. The government has a plan to develop Gwadar Special Economic Zone, which will be watershed for the economy of not just Balochistan but for the whole country, he added.The Finance Minister said privatization programme will be revived to create more opportunities for the private sector to invest and manage newer assets. – Brecorder