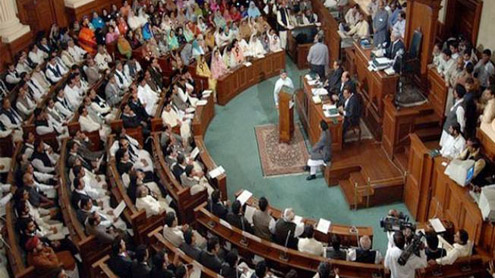 Presenting the budget for the fiscal year 2013-14 during the PA session with Speaker Rana Muhammad Iqbal khan in the chair, the provincial finance minister said that the general revenue receipts by Punjab have been estimated at Rs 871.95 out of which Rs 702.12 billion will be received from the federal government under National Finance Commission (NFC) award while the provincial receipts including the tax and non-tax revenues have been estimated at Rs 169.83 billion  in the budget.

The Provincial Finance Minister said that the Punjab government has set a target of tax receipts at Rs 126.7 billion during the next fiscal year which is 40 percent higher than the current revised targets of the provincial government.He said that Rs 126.7 billion tax target is a historic decision by the PML-N led Shahbaz Sharif government which would serve as an important milestone in the journey towards provincial autonomy besides raising the resources for the development works in the province.The Minister said that no increase has been proposed for the non-tax receipts including hospital outdoor fees (Purche) and traffic chalan etc.

He said that the public welfare projects were not possible without increase in the provincial receipts, adding that the Shahbaz Sharif government had introduced Punjab Revenue Authority (PRA) and decided to collect sales tax on the services during the current fiscal year and these steps bore fruit.The Minister said that Punjab government generated Rs 37 billion during the fiscal year 2012-13 with the help of Punjab Revenue Authority, adding that Rs 15 billion higher than the total receipts by the FBR during the fiscal year 2011-12.

Terming the provincial budget a balanced document, he said that the preference set in the next fiscal budget correlate with the PML-N manifesto and vision of the Punjab government, adding that the preferences will help strengthen the province economically, provide better education and health facilities to the masses, set new principle of good-governance, make the youth viable members of society and ensure agriculture and industrial revolution in the province. – APP