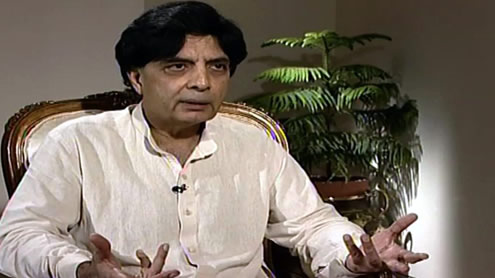 Interior Minister Nisar Ali Khan on Tuesday said remnants and the legacy of former ISI chief Gen (r) Shuja Pasha must be eliminated from within the army.

“I have always said that we have an army chief [Gen Kayani] who has commendably stayed away from politics, but the legacy of General (r) Pasha and others like him is still alive in the military. We have to eliminate such legacies from the Pakistan Army. I am not calling for their dismissal, but they need to be informed of the right path.” “The Pakistan Army is a dedicated force who sacrifices much for Pakistan.

No one is better than Pakistan Army. Martial Law was imposed by some commanders using the army; they maligned the respect of the army and gave birth to controversies. We will remove the reservations of Mehmood Khan Achakzai.” Nisar said the government would sit and talk in a good atmosphere with high officials of the army, as well as the lower management, to bring them on the “right track”. “This would help remove doubts of Mehmood Khan and others,” he said.

The interior minister said instead of coordinating, security agencies in Balochistan were competing against one another and compounding the problems in the restive province. He added that according to the Balochistan government, the Frontier Constabulary (FC) was not in their control. “The former government has handed over FC control to the provincial government,” Nisar said. Nisar said that he would be meeting the army chief and heads of security agencies. A meeting scheduled for June 20 with security agencies would also take place following which a security policy would be formulated, Nisar added. The interior minister added that two task forces would be constituted on anti-terrorism and missing persons. – Pakistantoday

Taliban Step Toward Afghan Peace Talks Is Hailed by US

Taliban Step Toward Afghan Peace Talks Is Hailed by US