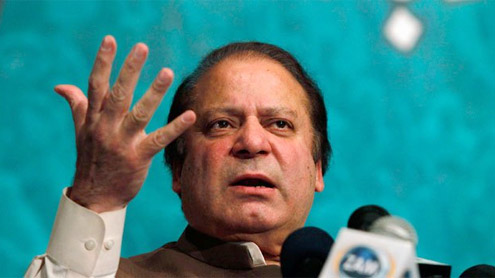 ISLAMABAD: A high-level meeting held at the prime minister’s office over evaluation of the security situation across the country in the wake of recent terrorist attacks in Balochistan on Wednesday agreed on a consensus mechanism to improve coordination between the intelligence agencies.

Furthermore, the meeting came to an agreement that drones were no longer tolerable.A source told Pakistan Today that the meeting was chaired by Prime Minister Nawaz Sharif. The meeting was also attended by Chief of Army Staff (COAS) General Ashfaq Pervez Kayani, Interior Minister Nisar Khan, Punjab Chief Minister Shahbaz Sharif and Advisor to Prime Minister Sartaj Aziz. Interestingly, in a meeting that was focusing on national security agenda, there were no representatives of Balochistan and Khyber Pakhtunkhwa, two of Pakistan’s most restive provinces with several violent nationalist movements and home to Tehrik-e-Taliban Pakistan (TTP).

“Prime Minister Nawaz Sharif made it clear that the government would not allow drone strikes at any cost,” the source said, and added that it was agreed in principle that the government would raise the issue of drone strikes at all forums which were in violation to the country’s sovereignty and international laws.Interior Minister Nisar Khan informed General Kayani on the conflicting reports of intelligence agencies regarding the recent terrorist incidents in Quetta.

“The participants were also taken on board about the lack of coordination and intelligence sharing between different agencies,” the source said. The source said that the meeting also agreed in principle to evolve a counter-terrorism strategy with consensus of all the stakeholders while it was also agreed that the concerns of the security agencies would be given a special importance in the strategy. – PT