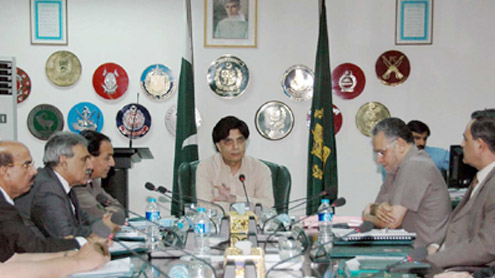 ISLAMABAD: Minister for Interior Chaudhry Nisar Ali Khan chaired a high level meeting of the Heads of all Civil Armed Forces (CAFs) at Ministry of Interior.

The Secretary Interior and Heads of all CAFs participated in the meeting. This meeting was the first among a series of meetings that would be held to formulate a well rehearsed and coherent National Security Policy. Addressing the meeting, the Minister described the CAFs as “Bravest of the brave” and said that he had great respect and honour for them and that he was quite cognizant of the difficult circumstances in which these Forces were operating.

The Minister directed the officers to serve the state to the best of their capabilities. He categorically stated that he would not tolerate anyone compromising on commitment to the Country and transparency.The Minister emphasized that his main focus would be on improving  coordination between various stakeholders like CAFs, Intelligence Agencies,  Ministry of Interior and Provincial governments and for this purpose a Task  Force is being constituted.

He added that another Task Force is also being established to look  into the matter of missing persons. The Minister asked the heads of the CAFs  to come up with their honest and sincere inputs at the earliest, in order to  evolve a comprehensive National Security Policy.He decided to withdraw CAFs from security duties of VIPs except the President, the Prime Minister and the Chief Justice of Pakistan.

In the meeting the senior officials of CAFs briefed the Minister  about performance of their respected forces and challenges they were facing  at various levels.Responding to this the Minister said that he would take the  stakeholder into confidence for the formulation of well organized Security  Policy. The Minister added that he himself belonged to the fourth generation  of a military family and had a great reverence for both Military and CAFs.

The Minister assured the Heads of CAFs of all the logistic help and support to impart confidence and to raise the morale of the CAFs.The Minister thanked the participants of the meeting for their  fruitful inputs and added that he would visit the headquarters of all CAFs to have a comprehensive discourse on the upcoming National Security Policy, which has the support of the highest leadership. – APP